First there was purple carrots (how did THAT happen), then black burgers and now the masters of creation have bestowed upon us the magic that is pink apples. It's a crazy time to be alive.

As of tomorrow, Tesco shoppers will be able to buy these mad new apples for the bargain price of £1.75 for a pack of four.

Grown by award-winning apple expert William Barnett (yes, that's a thing) in Herefordshire, the aptly named Surprize Apples, will go on sale at over 120 stores across the country.

As of yet no-one has revealed exactly what they'll taste like or mentioned exactly why this has happened, which just adds to the burgeoning sense of surprise. The mystery of it all is just too much for us to handle. 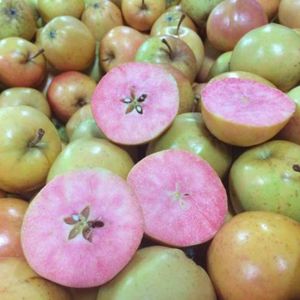 The supermarket's fruit product developer Ciara Grace said: "This apple literally stops people in their tracks on account of its unusual pale orange and yellow skin. This is the first time that it's ever gone on sale and there are only limited supplies but if it's a success we will stock it again next year."

This article was written by Maria Bell, follow her here @Marrbell.

Is This The Best Way To End Food Waste?

16 Delicious (And Disgusting) Ways To Eat A Cadbury's Creme Egg

Get Your Caffeine Fix! All The Coolest Coffee Shops In London

21 Epic Burgers Guaranteed To Give You A Heart Attack

Pink Tequila Is Here To Make Your Shots Instagrammable

This Matte Black Latte Will Release Your Inner Goth