Home / Women in Focus / Career / How To Deal With Being Made Redundant: 7 Ways To Keep Moving Forward

How To Deal With Being Made Redundant: 7 Ways To Keep Moving Forward

by Stephanie Ashley Published on 15 April 2014 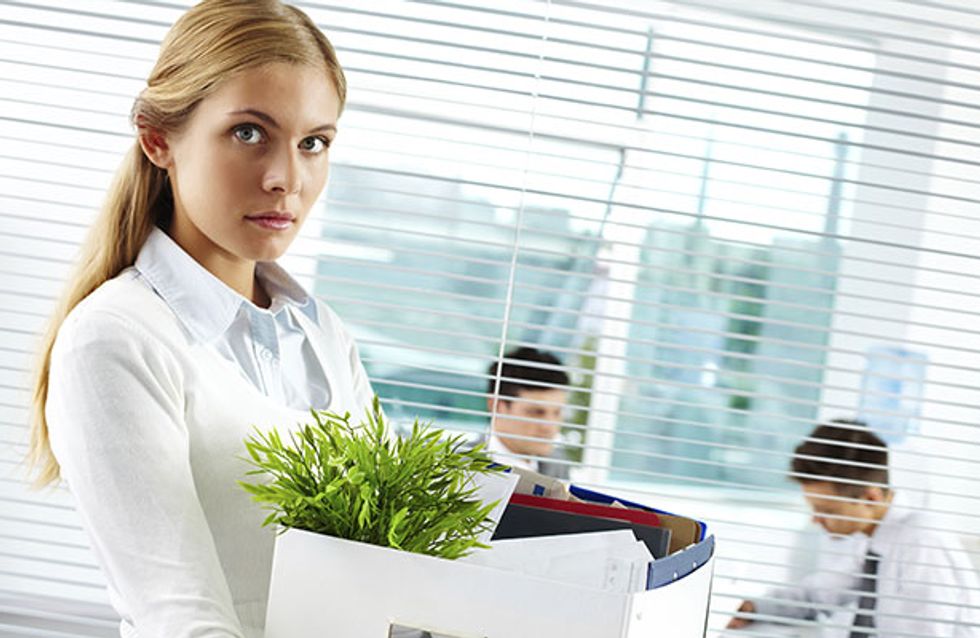 Being made redundant is not cool for anyone, but sadly it's an unfortunate part of life in a struggling economy. Unlike getting fired, redundancy has nothing to do with your competency, so don't let it keep you from finding a new position and excelling at it! If you're not sure how to move forward, we've got a few ideas...

Being made redundant is the epitome of not fun. In today's struggling economy, more and more businesses are having to make the decision to let go more and more hard-working people.

Someone faced with a P45 can easily feel stuck in a drought, and if they haven't faced the job hunt in a while, the task can seem more than daunting.

We spoke with Hallie Crawford, a certified career coach and founder of HallieCrawford.com, to see what all of you can do to pick yourself up and get back to work after being made redundant.

Realise it's not your fault.

To begin with, there is a HUGE difference between being made redundant and being fired, and we've got Hallie's word for it.

"When you're fired it's because your performance is unsatisfactory," Hallie says. "[Redundancy] is typically because of a company change (like downsizing or going out of business), as opposed to employee performance."

After being made redundant, many people will feel that it reflects poorly on them and their record. Somehow, they feel the powers that be didn't find them worth keeping; therefore, it was clearly their fault.

That is NOT true at all. Sometimes, difficult decisions must be made, and this is no reflection on your work ethic or results in the workplace.

If you can, negotiate how you leave.

Another difference between being fired and being made redundant is that sometimes, you can negotiate how you leave the office and make the best transition possible.

Hallie says that policies on severance pay and negotiations vary from employer to employer.

"Yes, it depends on company policy so you want to check with HR, but depending on the circumstances and how much flexibility they may have with their policy, you can ask for an additional week of severance for example or possibly negotiate your end date to give you longer time on the job. Realise that they may not have flexibility, but it does not hurt to ask."

Understand that your employers may be in just as difficult a situation as you are. However, if you've developed a good working relationship with them and they are flexible, they will likely want to help you in your transition.

Just because you are being made redundant does not mean you should let things with your former employer end on a bad note. Connections are everything in the business world, and as we said, if you keep up a good relationship with them, your former employer can do wonders to help you down the line.

As Hallie says: "Don't burn bridges, leave on a good note so you can get a referral from your last employer. Ask them for one as well, and if they're willing to be a reference for you, be proactive about asking for this, if appropriate (if you're not leaving on bad terms because of poor performance) before you leave."

Also, no slamming former employers when interviewing for a job. Nothing leaves a bad taste in an interviewer's mouth as much as a potential job candidate trashing their old boss' name.

​"Don't bash the employer," Hallie advises. "Don't lie, but give a high level picture of what happened. You don't have to go into detail, but frame it in a positive light."

Use ALL your connections on the job hunt.

Job hunting, even after being made redundant, is still all about your connections. We asked Hallie who to reach out to when going on the job hunt again, and her answer? "Everyone."

"Getting a new job is still about who you know," Hallie says. "Mentors, friends and family, connections on LinkedIn in the industry you want to move into or remain in. Find and attend meetings where people are employed (not just jobseeker networking events; no one there's employed, so they can't get you a job.) For example, association meetings."

For someone who's been out of the job hunting game a while, LinkedIn could be a somewhat new experience, but in today's job market, it is a vital tool.

So you've got the most accurate (and glowing!) resume possible, Hallie says, start taking notes as soon as you can.

"Make note of every accomplishment from your job, to note on your resume. Do this right away; memory fades over time, and you want to ensure you note everything. Beef up your LinkedIn profile to start networking right away and ensure recruiters and possible employers can find you on there."

While you're on the job hunt, don't sit back and mope while watching Netflix shows. Get up and be as productive as possible! This downtime is the perfect opportunity to round out your resume and try something new.

"Find something to do in the meantime," Hallie advises. "Take a class, volunteer, do freelance work to fill your time. Add to your resume so there is less of a gap, but also to show prospective employers you are pro-active about getting ahead in your career."

No matter your career field, a little volunteer work is never a waste of time. If you'd like to practice your public speaking skills, perhaps to get yourself amped up for all those interviews, try joining a toastmasters group.

Ask if this is actually a blessing in disguise.

Sometimes, we get stuck in a dead-end job that brings us no true joy or satisfaction, simply because it's an easy option. Don't let yourself sit back and take the easy road! Perhaps this forced career change is actually just what you need.

According to Hallie, "Sometimes it's a blessing in disguise. Many people fear [unemployment] and stay in jobs that aren't a fit for them, longer than they should. I've had many clients call me, sounding lighter and relieved from being let go, a seemingly surprising reaction. But it freed them up to pursue something they would rather do instead, and this gives them the kick in the pants to make it happen."

Every cloud has a silver lining. EVERY single one.

Perhaps one of the most important aspects of getting past being made redundant and finding a new job or career is this: having a plan. Those without a clear path ahead of them can find themselves feeling stagnant and stuck. Keep moving!

"The people who don't stay unemployed long are those who have plan A, B and C," Hallie says. "They are doing everything they can to find a job and have multiple lines in the water. They are persistent and consistent in their actions, and they focus most of their time on networking and talking to people."

Don't let a P45 be an absolute downer. Instead, see it as an opportunity to start a new chapter in your career or to change careers altogether. The sky is truly the limit!

Any other tips for dealing with being made redundant? Tweet us @sofeminineUK.