Yay! Alesha Dixon is expecting her first child with her boyfriend Azuka Ononye. More details are yet to be revealed, but we're pretty happy for the Britain's Got Talent judge!

Alesha Dixon is expecting her first child with her boyfriend Azuka Ononye.

The Britain's Got Talent judge, who's had a troubled love life in the past, announced the news on Thursday.

Her spokesperson has said in a statement: "Alesha Dixon and her partner Azuka Ononye are delighted to announce that they are expecting their first child later this year.

"Alesha and Azuka are looking forward to this happy chapter in their lives and would request privacy to enjoy this happy and most important event.

"Further details will be given at the appropriate time."

Alesha met Azuka when he worked as a backing singer for her when she launched her solo career in 2006.

But it wasn't until 2010 that the pair grew closer.

"Everyone's really excited that Alesha has found love again. They get on brilliantly and Alesha likes the fact Az isn't a celebrity and is just a normal, down-to-earth guy."

Alesha, 34, was married to rapper MC Harvey in 2005 but was heartbroken when it emerged he was having an affair with former Popstars: The Rivals contestant Javine Hylton. 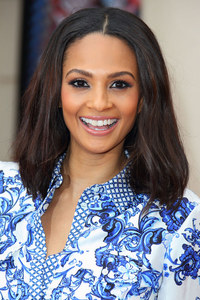