Johnny Depp is not someone who enjoys the spotlight, but it seems he is finally ready for the world to know about his romance with Amber Heard. Nearly a year after his split from Vanessa Paradis, Johnny stepped out with his The Rum Diary co-star at a gig in LA.

They've been very cagey about their rumoured romance, but it looks like Johnny Depp and Amber Heard are finally ready to go public.

The pair were spotted holding hands at a Rolling Stones concert in Los Angeles on Saturday night.

The Pirates Of The Caribbean heartthrob led Amber around backstage at the exclusive show in nightclub Echoplex.

The couple attempted to go unrecognised by keeping their heads down amongst the crowd, but Johnny's trademark flat-cap and Amber's red statement jacket made it difficult.

The pair were rumoured to have split after Amber reportedly struck up a romance with French model Marie de Villepin.

And Johnny's ex-fiancée Winona Ryder was said to be hopeful of a reunion with the actor.

But Johnny decided Amber was too good to let go and so made a series of extravagant gestures to win her back.

He first named a beach on his private island in Bahamas after her, before building a bar that looks exactly like the one in The Rum Diary.

Johnny is also said to have written Amber a poem and sent her a bouquet of roses every day during their split.

A source confirmed to Us Weekly: "They are so in love."

Johnny split from Vanessa Paradis - his partner of 14 years and mum to his two children - in June 2012. 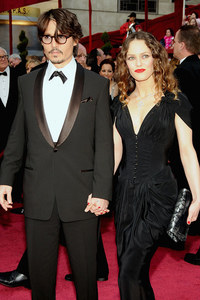