Justin Bieber's been hitting the headlines for a lot of things other than his music this year. The young singer seems to be going slightly off the rails and now he's allegedly in trouble with the law after police in Sweden raided his tour bus during a recent stay in Stockholm.

Swedish police raided Justin Bieber's tour bus in Stockholm yesterday after there were reports of a strong smell of marijuana coming from the vehicle.

The drugs squad was directed to make a search of the luxury coach, which took place just half an hour before the 19-year-old went on stage in the Capital.

The officers allegedly found both drugs and a stun gun - a weapon that requires a licence in Sweden.

According to Swedish paper Aftonbladet, Justin's team ran around issuing warnings to everyone after they learnt of the raid.

The publication claimed: "People in Justin's crew ran around into all the dancers' dressing rooms. They threw the doors open and yelled, 'No Weed' and 'Oh sh*t, the stash.' That got everyone going."

He said: “A colleague sensed what was considered to be a strong smell of marijuana.

"A stun gun requiring a permit was also found on the bus.”

There have been no arrests, nor were any of the items found associated with one particular person.

Lars said: “We don’t have any concrete suspicions against any specific person.

"There were several people on board.”

Despite the indication from the smell, the police have declined to identify the drug, saying it has to be sent for analysis first.

A source close to the Canadian pop star told the Mirror that Justin was not on board at the time of the search.

Despite the drama, Justin had no problems getting to the next stage of his tour in Finland last night.

The source said: “There’s definitely not going to be a problem.

"Justin has left the country and will be performing his concert in Helsinki as scheduled.”

He wrote: "Some of the rumours about me....where do people even get this stuff. Whatever...back to the music."

His following tweets were simply, "I love music" and "I love lamp".

This isn't the first time Justin's had a suspected drugs mishap.

Back in January he was photographed with a highly suspicious cigarette, which was thought to contain weed.

He tweeted after the photo emerged: “I never want to let any of you down. I love u. and..Thank u. #beliebers.”

After a variety of strange behaviour in recent months - from his gas mask modelling to the monkey he took on tour - Justin's got a lot of people concerned about him.

He split from girlfriend Selena Gomez at the end of last year, which appears to have been the trigger for his bizarre behaviour.

Oh the perils of being a child star! 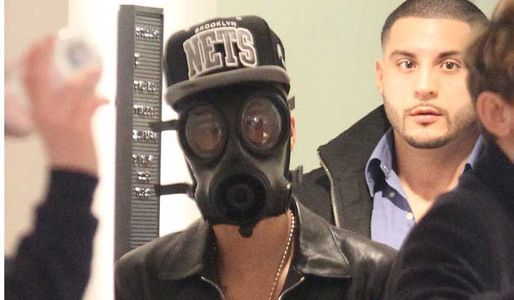 Francesca Menato
…
arrest
For all the best videos, memes and shareable news!