There's a celebrity baby boom! Kate Winslet is the latest star to announce she's pregnant. Though the actress has two children from her previous marriages, the baby will be her first from her marriage to Ned Rocknroll.

Kate Winslet is expecting a baby with her husband Ned Rocknroll.

The child will be Kate and Ned's first together and will arrive later this year.

A spokesman for the star has confirmed the news and says the couple are "delighted".

The Oscar-winning actress is already mum to daughter Mia, 12, from her marriage to Jim Threapleton, and son Joe, nine, whose father is her ex-husband Sam Mendes.

Kate and Ned - who is Richard Branson's nephew - met while on holiday on Necker Island in 2011.

Ned works for the space-travel brand of the Virgin empire and was born Ned Abel Smith, before legally changing his name.

The couple married in December 2012 in a private New York ceremony, where Kate was given away by her Titanic co-star and good friend, Leonardo DiCaprio.

Her spokesman announced at the time: "I can confirm that Kate Winslet married Ned Rocknroll in New York earlier this month in a private ceremony attended by her two children and a very few friends and family.

"The couple had been engaged since the summer."

Congrats to the happy couple! That's gotta be one cool baby with that surname... 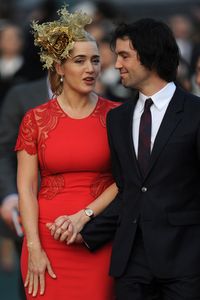 by the editorial team
+
All the news about Kate Winslet

Esme Riley
…
Pregnant
For all the best videos, memes and shareable news!