Kristen Stewart watch out: Is Katy Perry after Robert Pattinson?

The Kristen Stewart and Robert Pattinson relationship drama continues - and this time the temptation may be coming Rob's way. It sounds like Kristen's friend Katy Perry has her eye on the 26-year-old heartthrob and is just waiting for another slip up from KStew. Surely not?!

Kristen Stewart and Katy Perry looked as thick as thieves at the Kids' Choice Awards last month, but it sounds like there may be trouble in paradise for the gal pals.

The Twilight actress is bound to be unamused by reports that Katy is after her on-off boyfriend Robert Pattinson.

KStew was celebrating her 23rd birthday earlier this week and chose to spend it with her beau and other friends, including Katy.

The group spent the evening at No Vacancy at the Juniper Hotel in LA, where pop group Hanson - who have continued their career beyond MMMbop in the States - were putting on a gig.

Sources for the Metro said Kristen and 26-year-old Rob "weren't glued to each other's side".

Speculation surrounding the state of their relationship has been rife and it's unclear whether this is a sign of regained confidence and stability between them or a distance they can't shake.

According to reports, Katy would be hoping it was the latter.

The Part Of Me singer has recently split from John Mayer and was given a shoulder to cry on by a consoling KStew.

But it turns out Katy, 28, may have thrown her support back in her face when she allegedly told Kristen that she'd date RPatz if they ever broke up again.

The fellow guest claimed: "Kristen looked like she wanted to run away."

Kristen, 23, has been desperately trying to reconcile with her Twilight co-star following their break-up last summer.

And although there are obvious trust issues since she cheated on him with director Rupert Sanders, the pair look to be trying to make it work.

Sounds pretty cold-blooded from Katy - so much for girl code! 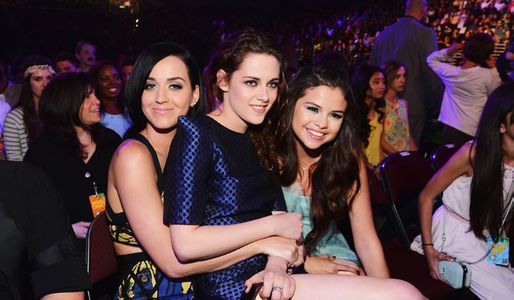