Michelle Keegan decided to surprise Mark Wright at work yesterday - and it's fair to say the TOWIE star turned radio DJ sounded rather shocked an uncomfortable! Listen to the exchange below...

Mark Wright got a surprise from his girlfriend Michelle Keegan at work yesterday.

The former TOWIE star was presenting his Heart RM radio show when the Coronation Street star called up to request a song.

When the stunning actress answered, Mark responded: "What, my Michelle? What have you called in for?"

Clearly feeling awkward, Mark added with a nervous laugh: "How random, you've shocked me. What song do you wanna play?"

Michelle requested Enrique Iglesias' Hero, because it's one of her "favourites".

Mark then asked: "Is it 'cos it's one of your favourites, or because I'm your hero?"

But the TV star quickly put her man in his place when she said: "That is absolutely cringe embarrassing."

Listen to the awkward exchange below…

The moment @michkeegan shocked me on @thisisheart calling in to request a tune on #ringwrighty soundcloud.com/martybruce/whe…

Michelle, 25, had earlier tweeted: "On the way to the gym listening to @markwright_ on heart might call him up and request a song haha #hewillbeshocked X."

Mark and Michelle hooked up at the beginning of 2013 after they spent New Year together in Dubai.

The couple were pretty coy at first, but now they seem happy for everyone to know about their romance.

Last week Michelle tweeted a photo of them chilling out in onesies with the caption: "We were planning a big night out tonight ... Plans have now changed! @MarkWright_ #cosy #chilling #piggingout." 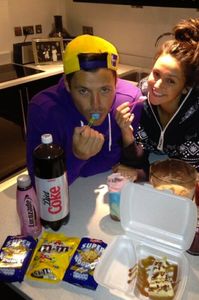 But it hasn't been all plain sailing - back in February Michelle lashed out when a Twitter wrongly accused Mark of cheating.

Michelle posted a cryptic message on Twitter and @Jamin_4 cruelly responded: "Hahaha has he cheated already??? U mugged yourself off there luv. You were respectable once."

Looking at his Twitter picture, Michelle added: "U mugged yourself off by getting that tattoo on your neck!"

The troll quickly backed down and Michelle proved she can look after herself.

Esme Riley
…
couple
For all the best videos, memes and shareable news!