The Pitch Perfect star has chosen a very original accessory for tonight's MTV Movie Awards. We're not sure what sort of statement she's trying to make...not a fan of the smoking ban?

Hana Mae Lee - one of the singing stars of Pitch Perfect - has arrived on the red carpet at the MTV Movie Awards 2013 wearing some pretty out-there head gear.

The young star turned up to the ceremony wearing a hat shaped like a cigarette butt.

As she presents herself as not just an actress but also a fashion designer we're wondering if this could be one of her creations.

Hana is hoping to be part of a wining cast as Pitch Perfect has four nominations.

She is personally nominated for Best Musical Moment along with Esther Dean.

Her co-star Rebel Wilson will be also hosting the show and is also in the running for three awards.

On top of that, the cast of the musical movie are performing a reunion number on tonight’s show.

When Esther spoke about the prospect of performing, she told MTV the most important thing was just, "to remember to start singing, because I know that I'm going to sing, I just need to know when to sing."

"​Every part is very important, and it's important to pay respect and understand what's going on around you."

Esther added: "You can't be distracted by the sexy men or women." 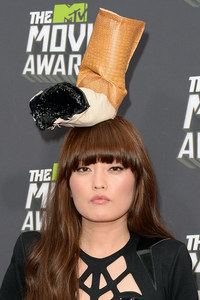 Francesca Menato
…
Awards
For all the best videos, memes and shareable news!