Frankie Sandford is the latest Saturday to announce she is expecting her first child. But unlike Una Healy and Rochelle Humes before her, she has not managed to stay a skinny mini and grow a baby inside her - seems pretty reasonable hey? Well, she's struggling with the all the digs she's getting for her weight gain.

Frankie Sandford is struggling to deal with all the negative attention she's been receiving for her weight gain since falling pregnant.

The 23-year-old announced she was expecting her first child with her footballer fiancé Wayne Bridge last month.

She took to Twitter to make her big announcement: "Some big news from me today! Wayne and I are having a baby.

"We are both SO happy and can't wait for his or her arrival!"

Since then she's started to noticeably fill out - like any woman does as her pregnancy advances.

At four months pregnant, the young singer is trying to deal with her changing figure.

She has said: "I'm having to get used to my body changing.

"If I wasn't on stage and being photographed all the time, I think I'd be more relaxed. There are a lot of things to get used to.

"You can look good from one angle and not another. I think black is definitely the way forward with my pregnancy."

Sadly, much like the scrutiny Kim Kardashian faced during her pregnancy, there's been a lot of attention surrounding Frankie's weight gain.

A source told New magazine: "Frankie is totally devastated by how she feels people are picking on her.

"She's already extremely emotional and hormonal. To feel that she is being judged all the time when she is just trying to do what's right for the baby is heartbreaking.

"She has been trying to put on a brave face in public, but behind the scenes she's been suffering very tearful and emotional breakdowns.

"She just bursts into tears when she sees these nasty comments."

We certainly wouldn't want to be pregnant with the paparazzi following! 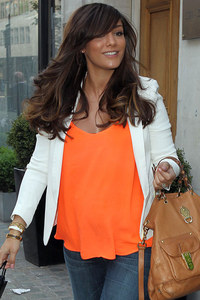 Francesca Menato
…
Pregnantweight
From hair ideas to outifts, look no further for your daily inspiration