The battle for Alan Sugar's investment is hotting up. Sadly, though, Alex Mills is out of the running after his team lost in a task that saw them produce and market ready meals. Perhaps best known for his perfectly plucked eyebrows, the young businessman thinks it was only right he was sent home.

Alex Mills is the latest candidate to be fired by Lord Alan Sugar on The Apprentice.

The Welsh Company Director was sent home after a task that challenged contestants to produce and market their own ready meals.

Though Alex wanted to go for a geography theme of meals from around the world - named Poppety-ping, the Welsh word for microwave - he eventually gave in to Myles.

When it came to pitching their food to supermarket executives, Endeavour's Dangerous Dinners was criticised for the skull they'd printed on the front of their packaging.

And their "Horrible Healthy Food" slogan was deemed unappealing.

Ultimately, though kids would love their horror-themed food because of its novelty, parents wouldn't be happy buying the product.

On the other hand, Team Evolve's "Oh My Pow" dinner lacked taste, but Neil's impressive pitch managed to secure them orders after he promised they would spice up their food.

But Luisa Zissman was criticised for not volunteering to cook in the kitchen, as she clearly had a better knowledge of food than Francesca.

Despite the poor taste, Neil's team secured a total of 2,800 orders, while Alex's trailed behind with 1,000 orders.

As a reward, Team Evolve enjoyed a day at a race track, while Endeavour pondered over their loss in the local cafe.

Alex decided to bring back Myles and Leah Totton into the boardroom, after Jordan Poulton impressed with his pitch.

Though Leah was criticised for being too quiet and Myles for his poor idea, it was ultimately Alex who was deemed the weakest link after giving in to his teammate.

Lord Sugar told him: "Alex, you should have stuck to your guns on this thing here. But I do admire your enthusiasm.

"And you’re very, very young, and I have to say, that for someone as young as you, you are someone to be admired."

He continued: "Alex, I think you’re a young, enthusiastic chap, and I want to send you off with a bit of advice: try and stick to something, right, and you’re going to succeed.

"But at the moment Alex, it is with regret, that you’re fired."

And after he was sent home in a black taxi, Alex admitted he couldn't argue with what the business boss had done.

He said: "I totally agree with Lord Sugar's decision... If I had stuck to my guns I'm fairly sure that we would have won." 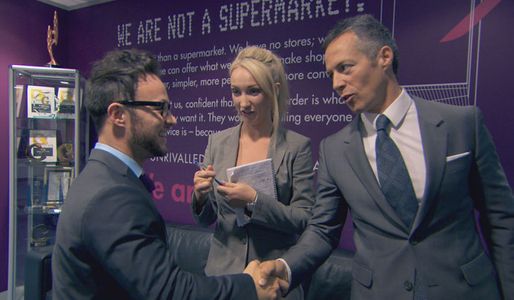