So who took home the popcorn at last night's MTV Movie Awards 2013? It was a night to celebrate your favourite actors and movies and in typical MTV form there were jokes, songs and nudity. Here's our round up of the best bits.

His beautiful co-star Jennifer Lawrence was sadly absent from the event, leaving everybody heartbroken when the pair won best kiss and a lone Bradley took to the stage to pick up the golden popcorn prize.

​Everyone was eagerly awaiting Emma Watson's speech as she accepted her award for Trailblazer; an award given to an actor who, despite their age, has managed to inspire others with a diverse portfolio of work and a transcendent reputation in the public eye.

She didn't disappoint, as she opened up to fans about her "awkwardness" growing up and told the audience: "Becoming yourself is really hard and confusing, and it's a process."

The Best Shirtless award went to the ever-ripped Taylor Lautner, who accepted his award with a suspiciously large belly and a backwards cap, as he looked to the "good old days" of Twilight and his super-abs.
​
Fortunately, the large belly was a fake.

Presenter Rebel Wilson had a pretty big night; not only did she perform with her fellow Pitch Perfect cast members, she also bagged Best Breakthrough Performance and Best Musical Moment...and a kiss from Zac Efron!

A movie that took home a surprising number of awards was The Avengers.

Tom Hiddleston got himself two prizes: Best Villain and Best Fight. Giving a shout out to a fellow Brit, Tom thanked One Direction's Liam Payne for naming his dog Loki - Tom's character in the Marvel epic.

The Avengers also took home the biggest prize of the night - Best Movie, which was presented by none other than Brad Pitt!

Jamie Foxx was another star getting a lot of love from MTV.

He was awarded Best WTF moment alongside Samuel L Jackson for Django Unchained, as well as the MTV Generation Award, for "an artist who has shown us a variety of impressive roles, a personal and professional flair and of course, an awesome level of talent."

There were no surprises when Will Ferrell took home the Comic Genius Award. He arrived dressed to the nines - in a suit of money!

Other highlights included Selena Gomez's performance of her new single Come & Get It, and the premiere of the new Hunger Games trailer, Catching Fire, introduced by none other than Liam Hemsworth. 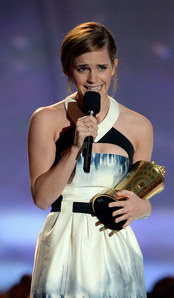