Stage and TV actress Sheridan Smith was entirely overwhelmed to receive the BAFTA award for best Leading Actress. With stiff competition from the likes of Sienna Miller and Rebecca Hall, the actress was incredulous at her own victory.

Sheridan Smith broke down in tears after winning best Leading Actress for her role in Mrs Biggs at the TV BAFTA Awards this evening.

​She's come a long way since Two Pints Of Larger and despite numerous acting accolades, she appeared to be in total shock at winning the award.

​After her name was announced, the blonde actress put her head in her hands as she immediately burst into tears.

​She even stayed seated for a few moments in complete disbelief.

As she arrived on stage she struggled to get her words out and asked everyone: "Is this a wind up?" 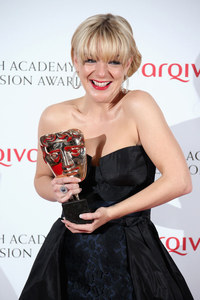 ​Desperately trying to pull herself together she told the audience: "I know you shouldn't cry, you look like a kn*b."

​She carried on: "Oh, my eyelashes are going to come off!"

​Once she was able to express herself she apologised, both for her tears and for giving a list of people to thank.

​Along with cast and crew she gave thanks to her family and Mrs Biggs for letting them "tell her story".

​The Girl didn't take home a single award, despite being nominated in four categories.

by the editorial team
+
All the news about Sienna Miller

Francesca Menato
…
Awards
From hair ideas to outifts, look no further for your daily inspiration