Tension grows between Martin and Sonia following her admission to hospital. When Sonia returns home, things start looking up for the pair when they finally open up and talk to each other about how they feel but it is short lived as Sonia questions if they still love each other.

After Tina lies to Tosh about going to visit Sonia in hospital, Tosh confronts her knowing she’s lying and she tells Tina she can’t carry on this way. Tosh tells her she’s putting in for a transfer at work and wants them to move to Croydon, much to Tina’s shock.

Linda is still angry about Johnny’s moped but he is adamant he is not getting rid of it. Whilst at the café, Mick learns that Denise is out of work and wanting Linda to take things easier, he offers her a job cleaning at The Vic. When Linda learns that Sonia is out of hospital she becomes enraged and goes to see her, taking all her recent anger out on Sonia. When she returns, things are made worse when she sees Denise cleaning and she storms off. As Mick follows her, he is stunned when Linda reveals she doesn’t want to keep the baby.

Mo finds a unique way to help attract the punters to Kat’s stall. Things are looking up when Mo announces that Charlie has sent some money for them to all join him in Lanzarote for Christmas but with things still frosty between Stacey and Kat it doesn’t look as though the Slater’s will be spending Christmas together.

Things are still bad between Peter and Ian. Jane assures Peter that Ian wants to make things right but he needs time. After some persuasion from Jane, Lauren invites Peter over to talk but can they sort things out? Jane tries to comfort Peter about everything that has happened but when he is alone he arranges to meet with a drug dealer… 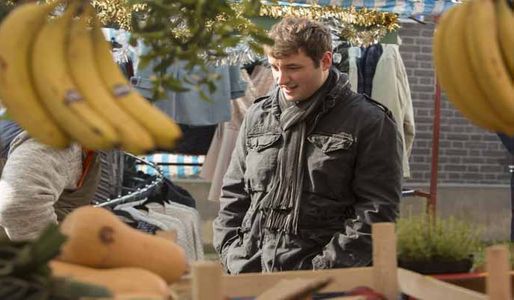