Barbie gets a Kate Middleton makeover for Christmas

Barbie has had more reinventions than Rihanna and Lady Gaga put together so she was never going to turn down a Christmas makeover now was she? This year she's back with a royal twist since Kate Middleton's milliner has got to work on five Christmas outfits just for her, and aren't they just plastic fantastic!

There's a new Barbie in town - and she's been given the Kate Middleton treatment.

Forget pink hot pants and unicorns this Barbie is all about the festive cheer and fancy dress with Christmas tree head pieces and snow globes for dresses, yes we're serious. Sounds like our kinda wardrobe!

"The inspiration behind the looks is traditional Christmas symbolism such as holly, reindeer, and snow," says Stephen. 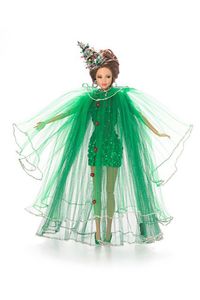 He adds: "The fabrics have to have a lot of thought, for example velvet on a human being looks luxurious, but on a Barbie it looks like fake fur. Barbie and I have the same design vision; we love tradition, but have an eye for the future."

From Chanel to Dior, Barbie's had over 70 designers falling over themselves to dress her and now she's got her very own master milliner.

The new festive dolls launch at Selfridges on Friday 15 November, each costing £250.