She's pretty fearless when it comes to striking a pose next to a furry friend or tackling the trends with a tarantula casually sprawled across her face, so an animal tea party was a breeze for Cara Delevingne. Her latest Mulberry offering sees her looking quite the English rose as she hosts a cream tea with a pony, a cockatoo and a tortoise... handbags and horses! Why ever not?

Whilst most of us were busy cuddling our duvets and nursing our first hangover of the year, Cara Delevingne was busy sharing her New Year's Mulberry campaign and it just might be her cutest yet.

More often than not CD will feel at home in her trainers and a flat cap but for her SS14 Mulberry shoot, she had other ideas.

Looking doe-eyed and feminine with a capital F, Cara strikes fearless pose after fearless pose without even batting an eyelid at the horse eyeing up her clutch bag like a carrot. 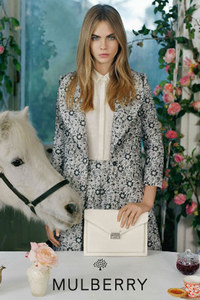 The art director Cooke Newhouse said: "The spring 2014 campaign was a beautiful but naughty tea party with Cara and her ark of animals — the perfect Mulberry moment. They didn’t have the best table manners, but Cara was very forgiving."

There's not a funny face or a tomboy trouser in sight for this season's arm candy is all about embracing the dainty, the demure and the delicate.

Think grandma's best china, a neatly pressed table cloth, English rose gardens, Miss Delevingne has never looked so quaint and all whilst a cockatoo named Spud roosts in her tresses. Kudos to you Cara!

The campaign was shot at the same 18th century mansion house as her autumn/winter Mulbs campaign where she juggled with owls and Willow totes.

But it wasn't all a hoot, speaking about her previous campaign she told Grazia magazine: "I love working with animals and especially owls. The best moments were when all the owls kept poo-ing on me - there was a real problem with poo on this shoot!"

A quick look through Cara's portfolio and it's plain to see she's quite the Dr Doolittle. Snakes, spiders, owls and ducks... what will be next?

What do you think of the latest Mulbs plus Cara collaboration? Tweet us @sofeminineUK