Most of us know that looking like a Barbie doll just isn’t going to happen in the real world…unless you’re pumped full of plastic of course. But new photos of what the average woman in the US would look like as ‘Normal’ Barbie shows just how unrealistic the Barbie body is…

Nearly all of us girls have had a Barbie doll. We styled them, cut their hair, made them do inappropriate things with Ken, but most of all we wanted to BE Barbie. The perfect hair, the perfect face, the perfect clothes – who wouldn’t secretly want that?

But the thing is, when you give a child a doll that represents an unrealistic view of the perfect woman, is it dangerous?

The debate on Barbie and body image has had a new twist as Artist Nickolay Lamm of MyDeals.com used CDC measurements of an average 19-year-old woman in the US to create a 3D model dubbed ‘Normal Barbie’.

You can see from the images quite how different she is compared to the original Barbie.

But this isn’t the only time that Barbie has come under-scrutiny, even from Lamm. The debate about the influence of Barbie on young children and women continues, but with the help of new technology and the new 'Normal Barbie' doll, it’s easier to see just how distorted the Barbie ideal is.

An infographic released in April by Rehab.com showed quite how impossible the Barbie ideal is.

They found that with a 16inch waist (smaller than her head), Barbie actually only has room for half a liver and a mere inch or 3 of intestine – youch.

Those perfect pins – pffft. Barbie’s legs are a whopping 50% longer than her arms whilst the average US woman’s legs are only 20% longer. That’s a jaw-dropping 30% difference. Plus if she tried to walk on those tiny size 3s she'd fall flat on her face, in fact the research shows she'd have to move around on all fours...

"If we criticize skinny models, we should at least be open to the possibility that Barbie may negatively influence young girls as well. Furthermore, a realistically proportioned Barbie actually looks pretty good."

"If there's even a small chance of Barbie in its present form negatively influencing girls, and if Barbie looks good as an average-sized woman in America, what's stopping Mattel from making one?" he continued.

Should we be giving children a toy which promotes unrealistic ideals that could potentially harm their self worth or should everyone just relax and realise that Barbie is just a toy?

Let us know what you think by tweeting at us at @sofeminineuk. 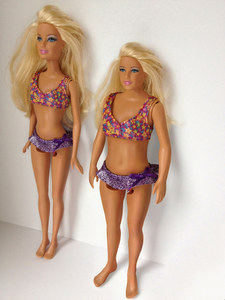