How sexist are we in 2013? Turns out very...Google suggest shows sexist search terms

You might assume that the idea that women should vote, work, or have rights is, you know, obvious - but think again. If you really want to know how much of a sexist place the world really is; just type a few little words into Google and you can find out. This new UN campaign is pretty powerful.

A campaign by UN Women and Christopher Hunt, uses shocking real life suggested search terms from Google to dramatically highlight how equality for women isn't quite as accepted as you might think.

​When typing in searches beginning with ‘women shouldn’t’, ‘women need to be’, and ‘women cannot’, the suggested search request answers came out with overwhelmingly outdated misogynistic, violent, and generally blood-boiling results. Now this won’t be the same in every country but after a quick test, it’s definitely – worryingly - true for the UK.

Campaign creator Christopher Hunt, says: “This campaign uses the world's most popular search engine (Google) to show how gender inequality is a worldwide problem. The adverts show the results of genuine searches, highlighting popular opinions across the world wide web.”

It's hard to believe that people would want to search things like ‘Women should be put in their place’ in 2013 isn't it? But just type it into Google yourself and see what happens. 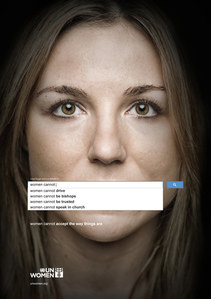 Campaigns like this one show how much further women have to go before sexist attitudes become a thing of the past.

Has this got you angry? Tweet us @sofeminineuk and let us know what you think.