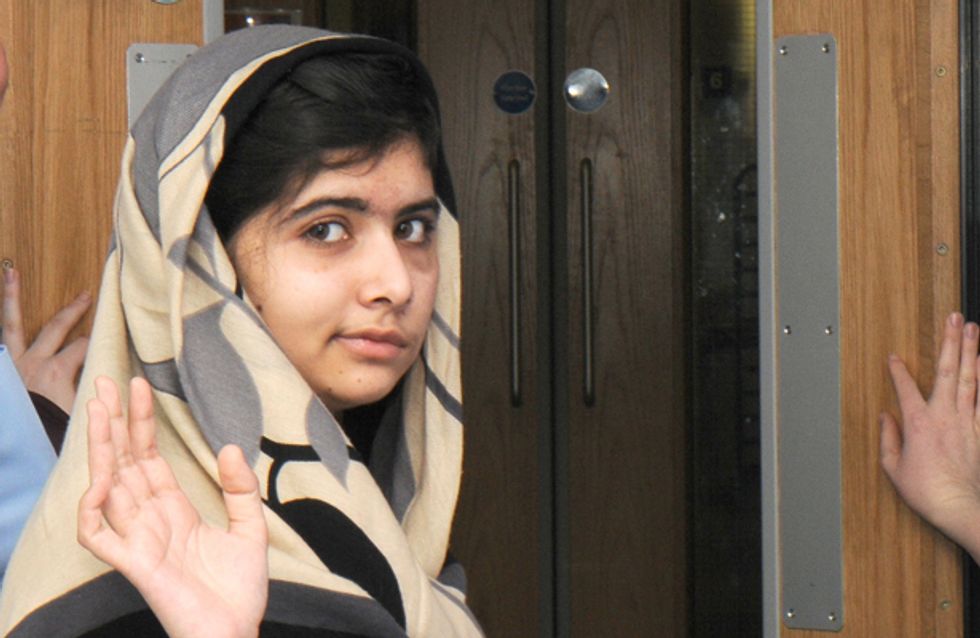 Remember Malala Yousafzai? She’s pretty hard to forget, last year she was the girl who took on the Taliban and, by some form of miracle, won. She’s recently been named as one of TIME’s Top 100 most influential people for 2013 and is the youngest person EVER to be nominated for a Noble Peace Prize. Now she’s heading up a campaign to address the worldwide emergency with education on Change.org. We investigate...

We’ve all complained about going to school. The homework, the rules, the sitting in a classroom for hours on-end separated from the outside world by what seems like a 300ft wall, but really we take our education for granted. While we’re getting the chance at a better future, other 11 year olds are working in sweat shops, are already married, or worse.

Malala knows only too well about the struggles that some children, often girls, face when it comes to getting a simple education. After writing for a BBC blog about her struggles under Pakistan’s Taliban rule and gaining notoriety campaigning for girl’s education, on the 9 October 2012, the Taliban made an assassination attempt on Yousafzai, shooting her in the head and neck whilst travelling home on a school bus. She was just 15 years old.

What Malala is asking is that you get behind her plea to get UN Secretary General, Ban Ki Moon to pledge towards putting money, resources and aid towards ending the tragic injustices of worldwide education when she addresses the UN in a special meeting this Friday.

She says in her petition:

“On 15 June, fourteen girls were murdered in Pakistan simply because they wanted an education. Many people know my story but there are stories every day of children fighting for an education. The basic right to education is under attack around the world. You can help me and girls and boys across the world. We are asking the United Nations General Assembly to fund new teachers, schools, books and recommit to getting every girl and boy in school by December 2015.”

It’s an estimate that around 57 million girls and boys across the world are denied an education, which is a statistic that goes so far beyond numbers.

The direct link between education and quality of life is difficult to ignore. Improving standards of education can help raise a country’s GDP. Research conducted by CIA World factbook reports that if India enrolled 1% more girls in secondary school, their GDP would rise by $5.5 billion.

It can help increase life expectancy too. UNESCO reports that a child born to a literate mother is 50% more likely to survive past the age of 5.

And prospects. According to research from The World Bank, a girl with one extra year of education can earn up to 20% more as an adult.

What this petition is asking for is a lot more than simply a chance to learn.

"Malala is an incredible campaigner, leading a global call on access to education, inspired by her own story. It would be difficult for anyone to ignore her call. Ban Ki Moon will be made very clear that huge numbers of people around the world are supporting her campaign and that he should take action."

"Petitions are about building movements of people to tell those in charge that they should change. It’s not just about signing something: it’s about making a statement that you believe in a cause and getting involved, in this case, in a global movement for change on access to education."

Although Malala is not your typical 15 year, children fighting for the right for education is far from uncommon. So far the petition, which launched on Tuesday, has already got 303,907 supporters, well 305,918 in the short amount of time it took to write this piece, but it still needs more.

So if you want to sign the petition then head over to Change.org and sign, it takes only a few seconds of your time. You can also share this by Twitter and Facebook so it can reach as many people as possible.

As Malala so brilliantly puts it:

Will you be signing? Tweet us and let us know what you think at @sofeminineuk.