Convicted sex offender Brock Turner was released from prison earlier this week after having served just three months of his six-month sentence for sexually assaulting an unconscious woman on Stanford University campus in January 2015. The decision to allow Turner to walk free from jail has understandably provoked state-wide outrage but one college student is giving survivors of similar attacks a powerful voice through the means of a raw photo series, in response to the injustice.

*Warning: This article contains photos some readers may find upsetting*

The photo series entitled 'It Happens' depicts the raw pain and disturbing realities of sexual assault with the aim of highlighting how common it is in a society which is often quick to dismiss sexual crimes and its perpetrators. 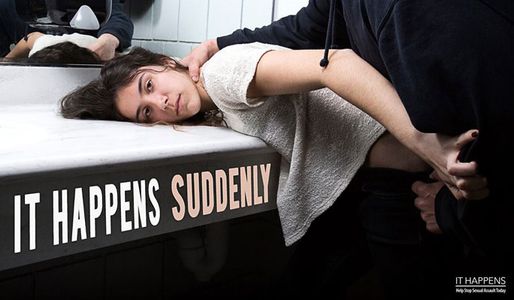 The nine-strong collection is a collaboration between awareness group Current Solutions and 21-year-old photographer Yana Mazurkevich and tells the real-life stories of nine sexual assault survivors through first-hand accounts.

Mazurkevich based the series on submissions she received anonymously and used models in place of the survivors. The harrowing images capture women in the midst of sexual assault with a direct reference to the woman in the Brock Turner case - the final photo which is labelled with the words 'it happened'.

Her suffering is told via the caption - a quote lifted directly from the her statement which she read to him during the trial. "You don’t know me, but you’ve been inside me, and that’s why we’re here today," it reads.

“I blacked out and just remember very short flashing images… I remember him asking me if I was on birth control, but I was too incoherent to talk. I was trying to explain that I wasn't. We had sex anyway. I didn't want to and I barely remember it.”

“I was at a party once, sober, and two of my good female friends pulled me aside, telling me that someone needed help. They pulled me into this room and pinned me against the wall and started kissing me and taking my pants off, but I was able to push them off and leave. The two girls who were my friends claim that they don't remember the incident since they were drunk.”

“I can't remember details or the order of things, but she was very, very aggressive. She left bruises all over me and I was bleeding the next morning. She held me down and forced a lot. I didn't say no clearly, but I definitely didn't agree to the aggressive actions she took. Lack of consent is not the presence of a no, it's also the absence of a yes.”

“He made me feel guilty if I didn’t do what he wanted. I remember on prom night, I was exhausted and just wanted to go home, but he insisted we mess around because that was the whole point of prom night, and that's what we were supposed to do. I still wonder if he knew just how manipulative he was.”

“When I was in high school, the only place to live for me was my uncle's place. I thought I could trust them, but there were nights when I would wake up to one of them, the biological one, in my room, or he would sneakily try to touch my junk. I never really resolved it.”

“I lost my virginity at a party when I was in middle school. He gave me a drink and I can’t really remember what happened after that. Just bits and pieces for the most part... but I couldn’t say no or push him off while he made me have sex with him. I woke up next to him and I was really sore but i couldn’t tell anyone what happened.”​

“I was tattooed by a guy and while he was tattooing me, he kept inserting his fingers up my vagina. He said he had to keep his hand there to keep the skin taut for tattooing. The most ironic part is that the tattoo is the symbol for female; I wanted the tattoo as a sign of feminism and got sexually assaulted in the process.”

“We had been drinking and, by the end of the night, I had lost all control. I was falling in and out of consciousness. I remember waking up with him on top of me but I kept passing back out before I could do anything about it. I always thought it was my fault for getting too drunk.”

“You don’t know me, but you’ve been inside me, and that’s why we’re here today” - Stanford assault survivor.

If you have been affected by any of the material in this story, help and support can be found at rasasc.org.uk or by calling 0808 802 9999

This Girl's Tattoo Makes A Powerful Point About Depression

Photographer Captures Powerful Images Of His Girlfriend In Labour