Home / Women in Focus / Key debates / She's back! The Evolution of Wonder Woman

She's back! The Evolution of Wonder Woman

by Stephanie Ashley Published on 19 December 2013 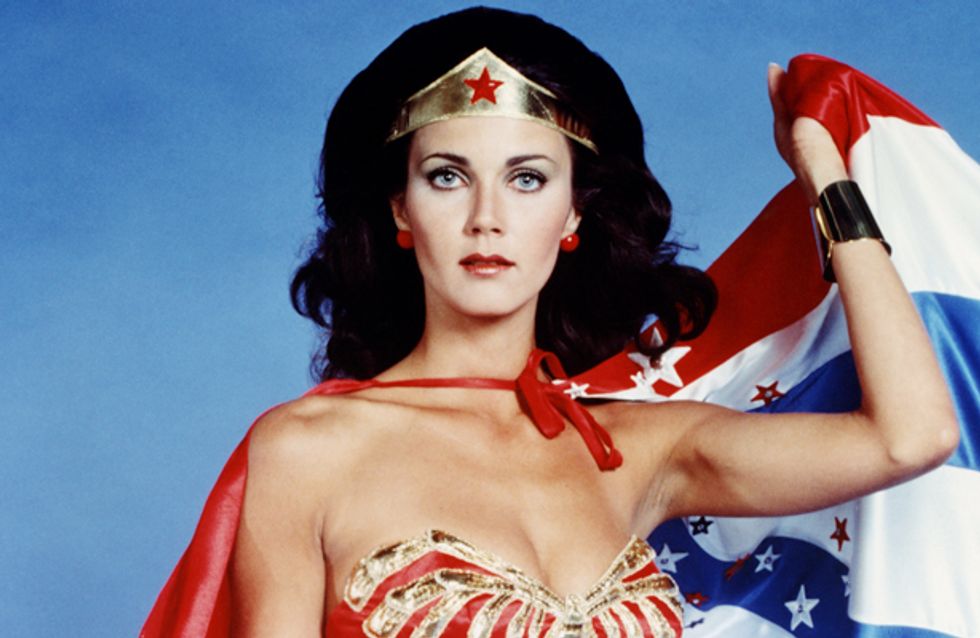 Wonder Woman is arguably the most famous super heroine of all time. With her badass attitude, her hot and healthy body, not to mention all her cool toys, she is the one character of the comic world that every little girl dreams of being. With her fight for peace and humanity, Wonder Woman is the ultimate feminist symbol, but over the years, where has she disappeared to?

Wonder Woman rocks, period. She is a beautiful warrior princess who kicks butt and saves the world. What more could you ask for?

Debuting in 1941 as one of the first and fiercest female super heroes, Wonder Woman took the world by storm. But over the past few years, while men in spandex have stormed the big screen saving the world, America’s premiere super heroine has been nowhere to be found.

Until now. The sequel to Man of Steel is bringing her back to the big screen with Israeli actress Gal Gadot cast as Diana Prince, aka Wonder Woman.

Take a look back at how Wonder Woman has evolved into a major feminist symbol, and why we're right behind her star-spangled unitard.

The character of Diana Prince, first appeared in DC Comics All-Star Comics #8 in 1941, when army pilot Steve Trevor crash lands on a secret Amazonian island. Diana takes on the responsibility of returning Steve to his home and revealing the Amazonian race to a world riddled with war.

Throughout her appearances in DC Comics, ranging all the way up to the 2011 comic reboot, Wonder Woman must struggle with her warrior upbringing and her desire to bring peace to the world.

She is sexy, with her ever-changing red, blue, and gold unitard, and has the best toys, like her invisible plane and lasso of truth. But, while she is sexy and fierce, she remains physically and emotionally strong and intelligent, making her truly a heroine to admire.

Wonder Woman’s first appearance on television came in the famous animated show, Super Friends, where she fought alongside fellow super heroes Superman, Batman, Flash, Aquaman, and the rest of the Justice League of America.

The show reveals the backstory and struggle of Wonder Woman as a super hero and is considered one of the most faithful TV representations of DC Comic characters. Wonder Woman fought bad guys and helped her friends for the entirety of the show’s 12-year run.

In 1975, the only actress to ever play Wonder Woman in a live performance hit the screen for the Warner Bros. television show Wonder Woman. Lynda Carter made history by playing the smart and sassy heroine, and no actress to date has been able to fill her high-heeled red boots.

The show joined an upsurge of super hero television shows produced in the 1970s and 1980s, including the popular show, The Hulk. While the show often pushes the line between wit and camp, it is a straightforward and memorable performance of the super heroine.

Any fan of Cartoon Network knows of its popular Justice League animated series. This series, similar to the original Super Friends series, features members of the DC Comics' Justice League of America. Unlike its predecessor, its main crew of characters is much smaller, often with only Wonder Woman and Hawkgirl holding down the fort for female super heroes.

This show once again features Wonder Woman’s combat skill, awesome gadgets, honed intellect, and super strength, but it also opens up even more human possibilities for Wonder Woman including love, for Steve Trevor and Batman, and betrayal.

In March 2005, Warner Bros. announced that Buffy the Vampire Slayer and Firefly writer Joss Whedon was signed on to write and direct a live-action film with Wonder Woman as the lead. Sounds awesome, right?

Joss is known for creating strong, forward-thinking heroines, so he would seem like the perfect writer for the fierce, complex character of Wonder Woman.

Well, by February 2007, Whedon left the project without even finishing a draft of the script, citing differences with the studio and a lack of enthusiasm for the project. As karma would have it, Joss went on to write and direct the blockbuster hit The Avengers for rival comic creator, Marvel Comics.

Ever since then, studios, writers and directors have been scrambling to bring the super heroine to life, whether on television or the big screen. Every actress from Megan Fox, to Cobie Smulders, to Beyonce, to Angelina Jolie, was rumoured to be vying for the role, but nothing ever stuck.

In 2012, NBC created a pilot for a new Wonder Woman television show, starring Adrianne Palicki, but the pilot flopped and was never taken to production. It seemed that all hope was lost of seeing a female super hero make it big amongst the male frenzy.

Man of Steel 2: Batman vs. Superman

Just when it seemed the famous and fabulous Wonder Woman would never see the big screen, in walks Zack Snyder, director of Man of Steel and the upcoming 2015 Man of Steel sequel, to cast Israeli actress Gal Gadot as Diana Prince.

Gal will star as the Amazonian princess alongside Henry Cavil, returning as Superman, and Ben Affleck as Batman. The actress most recently worked on the Fast and Furious 6 film, released amongst the tragedy of Paul Walker’s death.

Though you’d think fans would be ecstatic to finally have a definite chance of seeing the iconic heroine on the big screen, many are quite put out. Many fans are angry over Gal’s slim, not particularly buff, physique. Others grouch about Wonder Woman’s role as a secondary character in the film.

First of all, being Wonder Woman is all about the attitude, so only time will tell if Gal’s got the stuff to pull it off. Secondly, there is a point to be made that female heroes have only been appearing as secondary characters; but hopefully, when Wonder Woman graces the big screen, the world won’t be able to get enough of her, leading to her own, long-awaited franchise.

So, why has it taken so long for Wonder Woman to be brought to the flesh-and-blood screen again? Original live-action Wonder Woman, Lynda Carter has her own opinion.

"I think they try to just make her a female version of a male super hero, and that's not what she is," Lynda told Entertainment Tonight Online. "She is an Amazon Princess and she's got really strong sisterhood values. She's smart, and she just happens to be beautiful and super strong... Maybe they need a female writer who gets it. I've often tried not to say that, but I think it's the truth. It's like, 'Hellooooo guys, get a female that understands what that's all about.' … There's a humanity that they're missing. There's got to be a sweetness, a kindness, a goodness in the character. The rest takes care of itself."

Perhaps Lynda has a point? Why do you think it’s taken so long to bring Wonder Woman to the big screen? Tweet us @sofeminineUK.