Victory for women on banknotes campaign! Jane Austen to be on £10 note 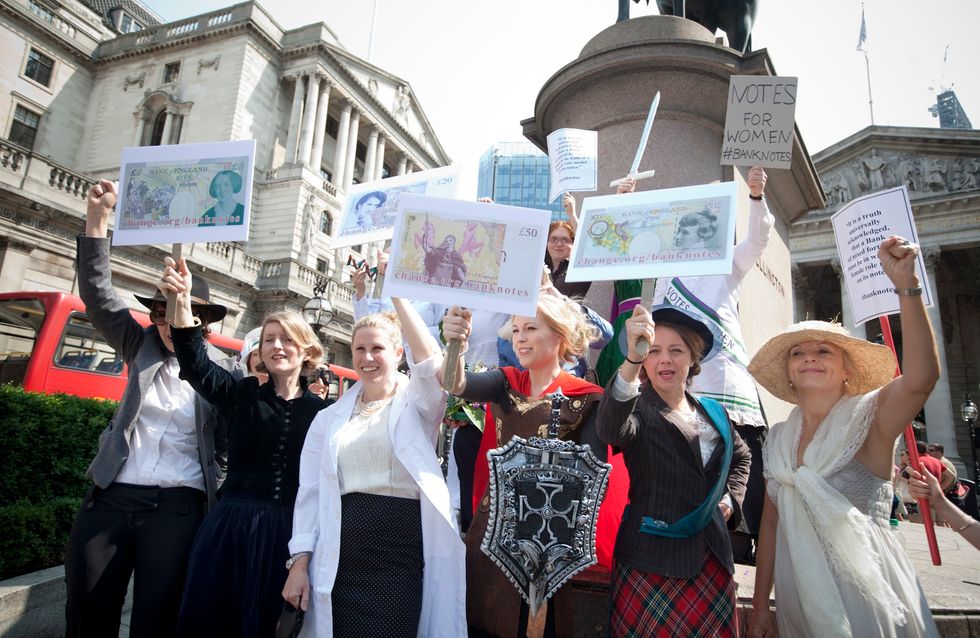 Today, due to the major success of the campaign ‘Bank of England: Keep a woman on English banknotes’ on Change.org, The Bank of England will announce that Jane Austen will be the face of the £10 note from 2017. It might seem small, but her tiny face is a huge reminder that the types of niggling, normalised excuses for sexism just don’t cut it anymore.

There have been a few fairly riling cases recently where people have tried to air-brush women out of history. Women like Virgina Wade, the ACTUAL first British Wimbledon champ (sorry Murray, we do still love you!), and the four others who followed her. But maybe more poignantly, The Bank of England’s attempt to wipe every single woman who has ever achieved anything for Great Britain by proposing an all-male cast for our Bank Notes really took the biscuit.

To put in a bit of background to this victory, a few months ago The Bank of England announced that they would replace the only female face on our nation’s currency, Elizabeth Fry, (except for The Queen) with Winston Churchill. Unsurprisingly people thought that this was giving out the wrong message that women’s achievements mean nothing - to just about everyone.

In came Caroline Criado-Perez, part of The Women’s Room who set up a petition to keep women on Bank Notes citing the 2010 Equality Act, which attracted attention from £35,000 members of the public, the press and even Ed Miliband.

​"It matters because young women growing up see a parliament that is 57th equal in the world when it comes to female representation; a media where only 1 in 5 experts is a woman; and a business world where female directors represent only 16.7% of the total. Currency, as its name suggests, is fundamental to our daily lives. These notes will change hands every hour, every minute, every second. And every time they do, the message will drive a little deeper home: women do not belong in public life - they never have, and they never will."

After a lot of protests, a lot of social media leg work and a whole load of support from the public, this campaign has led to The Bank of England announcing that it would review their process for selecting historical figures for banknotes. Having a female face on a ten pound note might not seem like much, but this is an example of how public institutions should act responsibly to promoting a place of equality.

Caroline Criado-Perez said: “This is a brilliant day for women and a fantastic one for people power. Without this campaign, without the 35,000 people who signed our Change.org petition, the Bank of England would have unthinkingly airbrushed women out of history.

“We warmly welcome this move from the Bank and thank them for listening to us and taking such positive and emphatic steps to address our concerns; to hear Jane Austen confirmed is fantastic, but to hear the process will be comprehensively reviewed is even better. A wonderful side-effect of this announcement is that thousands of pounds raised for a court case can now go to Fawcett, Women’s Aid and Rape Crisis, who are all struggling in the current climate of austerity.”

The only downside to this campaign is that it even existed in the first place.

Louise Whitfield, a partner at law firm Deighton Pierce Glynn who were advising Caroline on the legal aspect of the campaign said that the fact that The Bank of England couldn't recognise their decision as one that affects equality shows how far issues of gender equality still have to go.

She says: “This is a great result for Caroline’s fantastic campaign, but it was very disappointing that it needed the threat of litigation to secure a sensible response from the Bank and that they refused to accept that who appears on banknotes was highly relevant to gender equality: this was blindingly obvious and shouldn’t have needed a lawyer to point it out. It is clear we need a statutory equality duty and the ability to enforce it in situations such as this.”

But thanks to this incredible, high profile campaign we can only hope this won’t be happening again. Jane, we look forward to seeing you shortly!

Tell us what you think about the campaign’s victory by tweeting us at @sofeminineuk!