by the editorial team Published on 25 April 2014 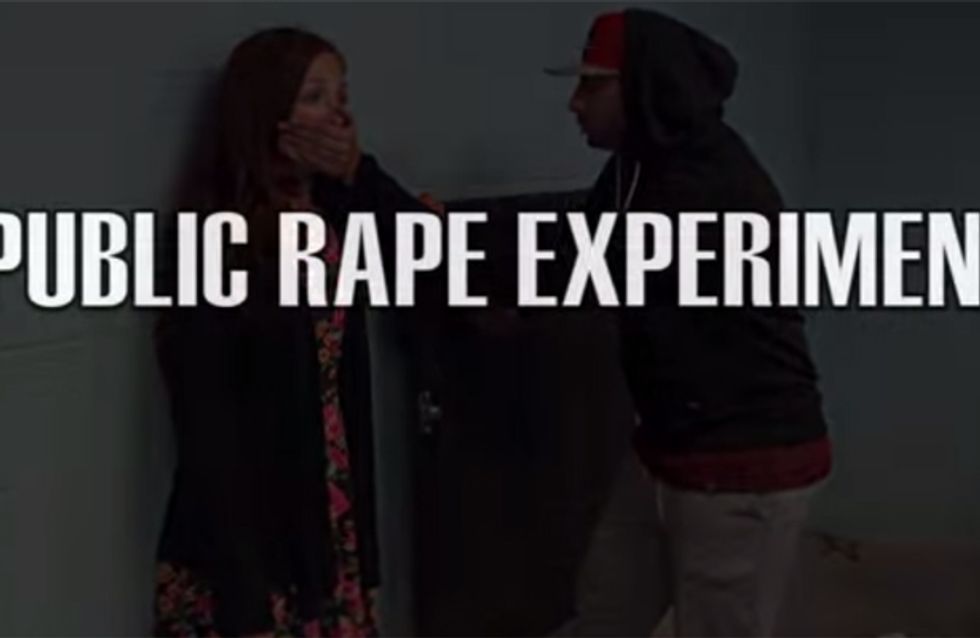 Yousef Erakat is a YouTuber who video tapes some hysterical pranks and experiments for his channel, FouseyTUBE. He also uses his craft to raise awareness for some tough issues, like sexism and rape culture. Is his viral video on rape culture provocative and intriguing, or does he take things too far?

In one of our favourite online pranks, Yousef dresses up in leggings and fools unsuspecting men who are passing by into appreciating his rear end assets.

In his latest video, Yousef takes a more serious turn and takes on the subject of rape culture. The video consists of two parts: the real-life story of a young woman who was raped at her 13th birthday party and the men's bathroom rape experiment.

The story is naturally emotional enough to bring all viewers to tears, but the gripping and terrifyingly true tale is not what has YouTube watchers up in arms. In the experiment, Yousef sets up speakers and a mirror in the handicapped stall of a men's public bathroom. When a man walks into the bathroom, he is immediately met with the sounds of a woman being attacked in the farthest stall.

Many of these men (thank the powers that be), rush to the aid of whatever poor woman is being attacked. However, these heroes are not met with a scene of violence. Instead, they face a mirror and a provocative message.

In Yousef's original idea for the experiment, the wall behind the mirror stated, "YOU JUST SAVED A LIFE." A true and heartening message to whatever man just burst in like the decent human being he is.

Though the original writing on the wall would not have sparked nearly as much controversy, Yousef scrapped that idea because it did not bring across the message he wished. Instead, written behind the mirror was the message, "THIS IS WHAT A RAPIST COULD LOOK LIKE."

Many viewers have misunderstood the video, and Yousef has had to come forward to defend his work and the vision behind it.

Just two days ago, Yousef explained himself and his experiment in an essay-sized comment. He told viewers that he feared if he went with his original message on the wall, the point of the video might be lost.

Yousef wrote, "the problem: if I had executed the experiment that way, (the way all the people not happy with the finished product now wanted it to be) all I would have done is create another experiment on the 'bystander effect.' It would have completely derailed the topic from 'rape' / 'rape culture' and made it into a 'what would society do if they were put in an uncomfortable position.' I had done enough of those with my previous experiments. I had to think of another way."

Yousef also wrote that all of the men involved in the experiment received an explanation after leaving the restroom. None of those men walked home wondering if they were just called rapists; instead, they were told the point of the project and were glad to be part of it.

Perhaps the drama over Yousef's choice of words has overshadowed three of the most important, poignant and shocking points that this video makes.

One: This is the true story of a woman whose life was completely altered. A woman who was raped.

Two: Some of those men WALKED AWAY. They clearly heard the sounds of a struggle, but they IGNORED IT.

Rape culture is all around us (whether we choose to see it or not), and whether you agree with Yousef's word choice or not, kudos to him for having the courage to make this video in the first place!

What do you think of 'The Public Rape Experiment? Which message do you think should have gone on the wall? Tweet us and join the debate @sofeminineUK