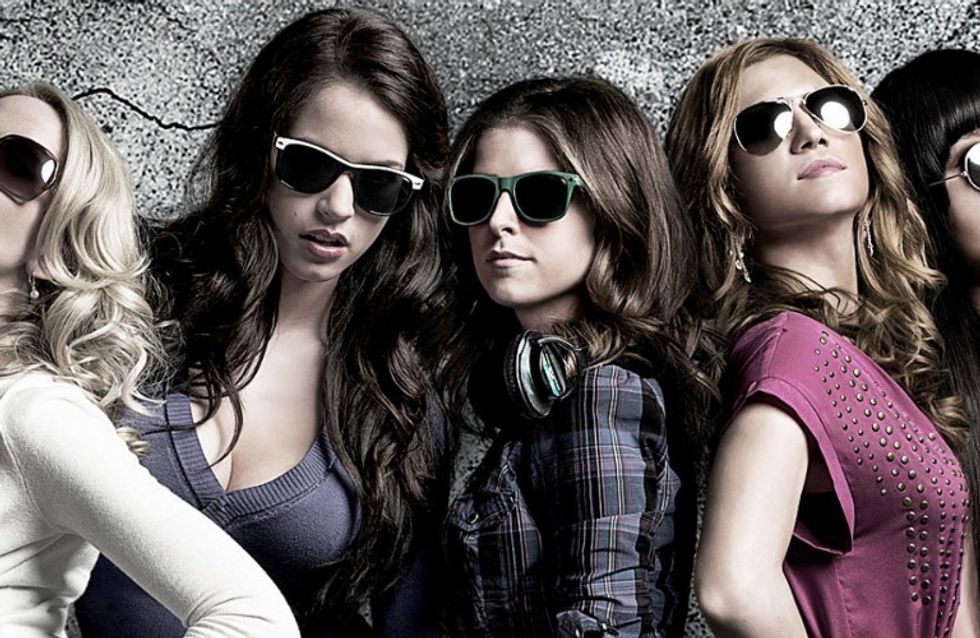 Even if you don't think listening to people make music using only their mouths is super cool, you probably loved the movie Pitch Perfect because it was the catchiest effing movie since we can remember. Luckily for the a capella fans of the world, Hollywood decided to give us Pitch Perfect 2. Aca-yes!

We can barely contain our perfectly pitched excitement, so here are the 10 highlights from the Pitch Perfect 2 trailer:

You probably fell in love with Anna Kendrick's accidental hit song "Cups" in 2012, no worries, we did too. Anna's character sang the song in the original Pitch Perfect and even though the catchy cups routine doesn't make an appearance in the trailer, we have faith it will make the movie.

2. The whole gang is back

In case you were worried that everybody from the original flick wouldn't be back, fear not. The gang is all here and that includes Brittany Snow and her nodes.

Unlike the first film, looks like we won't be dealing with a lot of inner team strife in the sequel. If you don't believe us, there's a campfire singalong and a pillow fight to prove it:

4. The guy from Arrested Development is in it

Comedian David Cross, who we love most for his role as Tobias Funke in Arrested Development, is in the flick as the organizer of an underground acapella battling ground. If you don't watch Arrested Development then you may remember him as the creepy headmaster of Illyria in She's the Man:

5. Jesse and Benji are still heading up the Treblemakers

It wouldn't be Pitch Perfect without Benji doing some magic and Jesse (aka Skylar Astin) making our hearts melt by leading up the Bella's rival the Treblemakers. Fun fact: Skylar Astin has actually been dating Anna Camp (uptight Bella leader Aubrey) since the last movie wrapped. They are precious together:

6. They're competing against Europeans, and they're really buff

What's bigger than winning the national championship? The world championship, and it happens every four years. They will be competing against the creme de le creme of European acapella and as Fat Amy so smartly pointed out "she would love to be the ham in their ham sandwich."

7. Effie and her sidekick announcer are back and hilarious as ever

Gail (Elizabeth Banks) and her fellow MC John Smith (John Michael Higgins) will be coaching the Bellas and making their ridiculous, sexist and slaptstick commentary. We wouldn't have it any other way.

8. The Europeans ALWAYS win, and they don't speak loser

Turns out the Europeans are always the ones that win the world championship, and they HATE the Americans. When confronted by the Bellas, the Europeans kindly remind them that "they don't speak loser." Oh meine Güte.

9. Stacie is back trying to use her "hunter" for good

You may remember that Stacie has quite the way with men, she used to refer her pikachu as a "hunter," she also refers to it as a he. Well, Stacie is back with a brand new hairdo and is still willing to use her hunter to sabotage the competition if necessary. What a team player.

10. Best of all: Bumper is BACK and he still secretly loves Fat Amy

Bumper is back (thank god) and he is part of a new, sweater wearing crew. Looks like Bumper's stint didn't work out in LA because that outfit means he is part of the retiree crew that the Treblemakers beat up at regionals. Tough luck, Bumper. He is as charming as ever though, he solicits Fat Amy for a little hookup and it looks like she's game. If you remember, in the first flick when Bumper asks to kiss Fat Amy she compares it to debating trying meth and then realizing that it's probably not the best idea in the world. LOL.

What did you think of the movie trailer? Tweet at us! @sofeminineUK