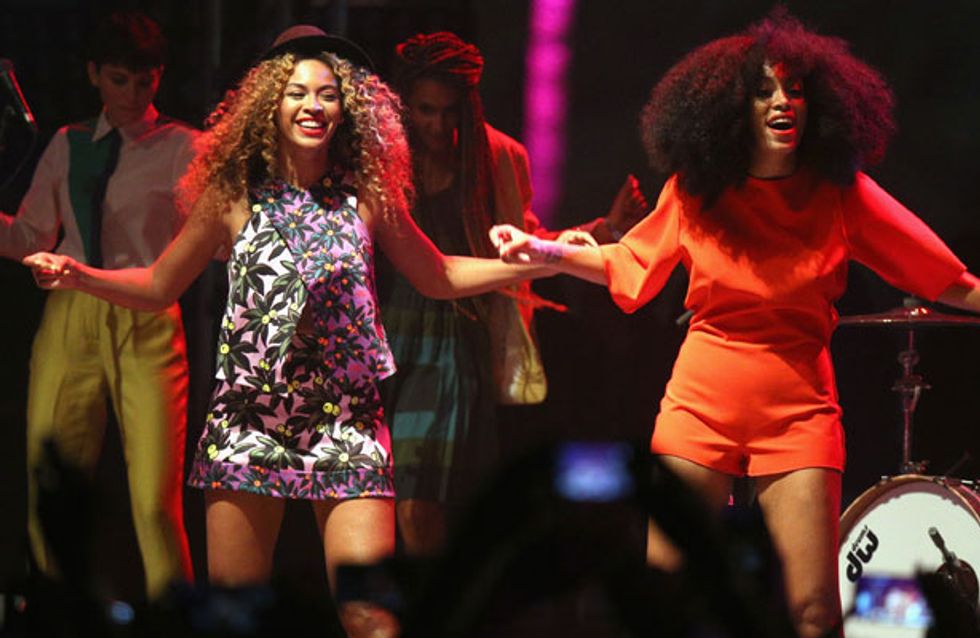 We're going to go ahead and call it: Coachella 2014 is already the best in the music festival's history! From the onslaught of stylish A-list celebs to crazy unexpected performances, we were barely able to keep up and contain our excitement. Here are 10 OMG moments from Coachella you won't soon forget.

Beyoncé hits the stage with her sister Solange

As Solange closed her set with "Losing You", her big sis Bey hit the stage to join her in a too cute dance bit. Now we can't stop doing the moves!

Wait, we had NO idea these girls were all BFFs. Such a gorgeous set of gals!

Not that you need another reason to love Leonardo DiCaprio, but here's one anyway. Peep him dancing it up and getting every bit of his life during a sand storm.

How are we sure this is the famed actor? These paparazzi photos show him wearing the same gear.

Is it terrible that we find this absolutely funny?

Gwen Stefani is pretty much our idol. The woman exudes effortless style, AND she's super talented. We had a bit of nostalgia as she hit the stage as special guest of Pharrell, and performed her massive hit "Hollaback Girl".

Yup, she recently had a baby and looks like that.

Well, they say blondes have more fun! She looks so amazing with lighter tresses that we're now considering reaching for the hair bleach. We love her new 'do that much.

Fans of Outkast were beyond excited to see the pair reunite on the stage for the first time in over ten years. Aside from performing a slew of their hits, Outkast tapped Janelle Monae and Future for a couple of songs.

It looks like Justin Bieber was able to stay out of trouble long enough to hit the stage at Coachella for a surprise performance with Chance The Rapper. Good for him!

Sure it's a Givenchy nose ring, but Kendall Jenner's choice of accessories left us yelling "WTF!" Not our fave moment from the budding supermodel.

Alexander Wang took to Instagram during Coachella to announce his collaboration with H&M. The two will be working on a capsule collection set to hit stores later this year.

We've got our wallets ready!

What are some OMG moments from Coachella we missed? Tweet us @sofeminineUK!