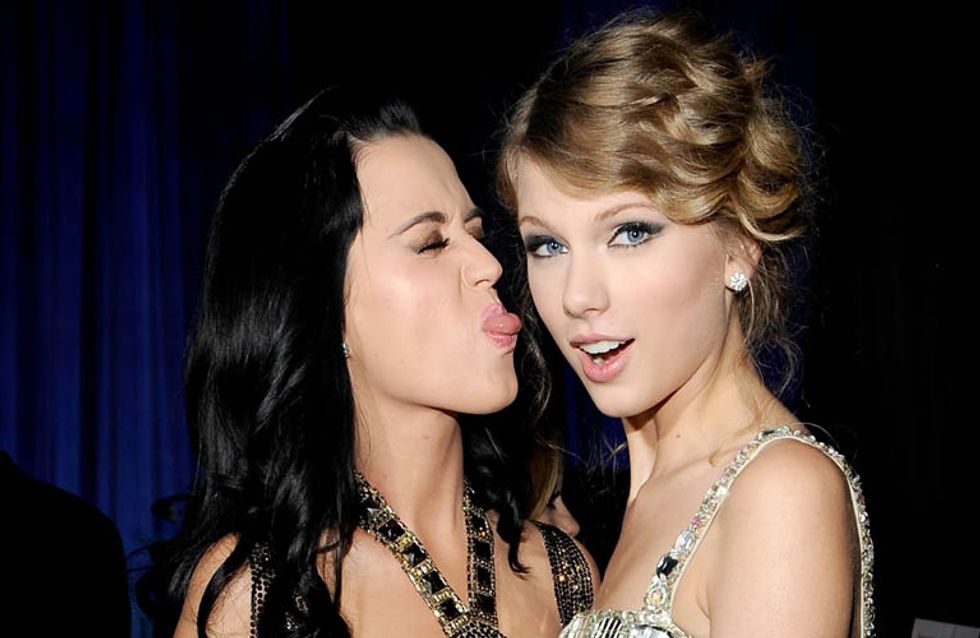 Taylor Swift's music video for her latest release Bad Blood is out, and is widely rumoured to be about a feud with pop rival Katy Perry. But they're not the only ones who have been fighting, reminding us that despite their wealth, fame and popularity, not every thing in celeb land is plain sailing. Through televised arguments, interviews and Twitter spats, here are some of the most infamous, public and downright hilarious celebrity spats from over the years...

Taylor Swift's music video for Bad Blood is a thing of beauty; a who's who of famous faces who team up with Taylor (or Catastrophe as she's known in the vid) as she takes down a friend who stabbed her in the back.

It has long been thought that this pal (though played by Selena Gomez in the music video) is actually Katy Perry due to Taylor's interview with Rolling Stone magazine. She said: “For years, I was never sure if we were friends or not. She would come up to me at awards shows and say something and walk away, and I would think, ‘Are we friends, or did she just give me the harshest insult of my life?’”

Following this, the unnamed frenemy apparently went too far. Taylor continued: “She did something so horrible. I was like, ‘oh, we’re just straight-up enemies’ and it wasn’t even about a guy! It had to do with business. She basically tried to sabotage an entire arena tour. She tried to hire a bunch of people out from under me…So now I have to avoid her.”

Suspicions that the b*tchy star was Katy Perry seemed to be confirmed when Katy later tweeted this:

Watch out for the Regina George in sheep's clothing...

What was once a beautiful brotherhood turned bitter after Zayn left One Direction and began recording with music producer Naughty Boy. After the latter posted a picture of the two of them in the studio, Louis Tomlinson tweeted: "Remember when you were 12 and you used to think those Mac filters for your pictures were cool haha ! Some people still do HA."

Uh oh. Zayn then responded: "Remember when you had a life and stopped making bitchy comments about mine?"

Oh boys, stop it! And to be fair on Louis, that picture really was stupid.

The feud reportedly began in 2003 (at Britney and Christina’s PEAK popularity) when Christina went to Justin Timberlake’s tour with him, despite the fact that he had an ugly split with Britney.

Aguilera then slated Britney’s marriage to KFed, saying (probably quite fairly): “I know they love each other, but Kevin is really low rent. The whole affair is just pathetic.”

When Nicki and Mariah appeared as judges on American Idol it was awful, with both of them snapping at each other at every chance. A video was leaked that showed the pair screaming at other, showing just how bad the fight had gotten.

When presenting the Golden Globe Awards, BFFs Amy and Tina accidentally-on-purpose offended the Country star by warning her to stay away from Michael J. Fox’s son.

Although it was only meant to a joke, Taylor wasn’t best pleased, responding: “Katie Couric is one of my favourite people…she said to me she had heard a quote that she loved, that said: ‘There’s a special place in hell for women who don’t help other women.’” Amy and Tina laughed it off though, even bringing the joke back when they hosted the awards show the following year.

According to Kelly Osbourne, Aguilera called her fat years ago. When Christina put on a few pounds Kelly got her own back while on her TV Show Fashion Police, saying: “Maybe she’s just becoming the fat b***h she was always born to be. I don’t know. She was a c*** to me…she called me fat for so many f**king years, so you know what? F**k you, you’re fat too!”

The troubled star doesn’t seem to be quite over the fight though, since after the release of Wall Street: Money Never Sleeps in 2010, Shia told The Bert Show: “You could have put Frankie Muniz into any of the movies I’ve been in and it would’ve still been no.1.”

Frankie then replied with a quick, snarky tweet saying: “Dear Shia LeBeouf, it’s getting creepy the fact that you can’t stop talking about me. It’s been 12 years now. I don’t know you. Thanks.”

Bill Murray reportedly didn’t appear in the second Charlie’s Angels movie not, as many thought, because it was a terrible idea (we kid…sort of), but because he and Lucy Liu had a terrible relationship.

Madonna really, really doesn’t like Lady Gaga, apparently because she believes Lady Gaga had copied her song Express Yourself with Born This Way.

Drake and Chris Brown got involved in a fight at a nightclub which led to eight people being injured as a result. Drake made it clear that he thought he was better than Brown in every way, saying on a radio show: “His insecurities are the fact that I make better music than him, that I’m more poppin’ than him, and that at one point in life, the woman that he loves fell into my lap.”

Eminem said the pair dated. Mariah said they’d simply hung out. Mariah then parodied The Eminem Show on her tour. In response, Eminem reportedly played voicemails from Mariah of her saying: “Why won’t you call me?”

Mariah then released a song called ‘Obsessed’ that was clearly mocking Eminem, who in response released THIS rap. Weirdly, Mariah didn’t respond to this one…

Kanye, being as unreasonable and cray cray as he is, ranted at the TV host on Twitter.

Not everyone thinks Julia Roberts is as much of a sweetheart as she makes out. Julia called out her co-star in I Love Trouble, calling Nick “completely disgusting”, and Nick retaliated by saying: “she’s not a nice person.” Come on Nick, we need details. Copious details.

The spat began when Sinead O’Connor wrote an open letter to Miley after Miley claimed her Wrecking Ball video was inspired by Sinead’s Nothing Compares 2 U video. She wrote: “The music business doesn’t give a sh*t about you, or any of us. They will prostitute you for all you are worth, and cleverly make you think its what YOU wanted.”

In response, Miley tweeted screenshots of Sinead’s Twitter from 2012 when she was suffering from mental health problems, as well as writing: “I don’t have time to write you an open letter cause I’m hosting & performing on SNL this week.”

Do you think everyone should just kiss and make up? Tweet us @sofeminineUK!