If a movie has a brilliant female director, a strong cast or an empowering storyline, we have included them here! Here are our favourite 15 films from the last five years we reckon every woman should watch... 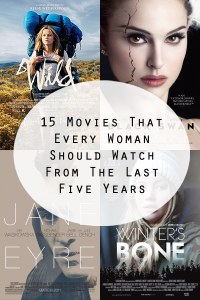 Emma Stone plays aspiring journalist Skeeter who, with the help of housemaids Aibileen and Minny, seeks to expose the terrible racism the maids deal with daily in Mississippi during the Civil Rights movement in the 1960s. It is powerful, thought-provoking and heart-breaking in equal measure.

Jennifer Lawrence plays Katniss Everdeen, the sole provider for her family who is forced to partake in a Government enforced fight to the death. This isn’t just a ‘kick ass heroine’. The characterisation of Katniss alone has been the series the incredible success that it is.

The outgoing and adventurous Merida is facing a forced marriage to one of the three sons of her family’s tribesman. Rather than focus on falling for one of the laddies who are after her hand, the story focuses on the relationship with Merida and her mother, family values and understanding each other. It will make you want to cry down the phone to your mother.

Natalie Portman plays an emotionally fragile ballet dancer whose sanity begins to unravel when she is given an understudy, the confident, sensual Lily (Mila Kunis). It’s a psychological head trip and it is no wonder Portman won an Oscar for her performance of a girl constantly on the verge of a nervous breakdown.

5. Blue is the Warmest Colour

A coming-of-age tale of teenager Adele who discovers her sexuality and falls in love with the vibrant, blue haired Emma. It's an amazing journey about discovering yourself, and was critically lauded on its release with outstanding performances from both Adele Exarchopoulos and Lea Seydoux.

Annie (Kristin Wiig) is at rock bottom when her best friend announces that she is getting married and introduces Annie to her new seemingly perfect friend, who attempts to underhand Annie to get the Maid of Honour slot at every opportunity. Not only is this film hilarious, it also tells an important message about female friendships.

Author of the Mary Poppins books P.L. Travers goes head to head with the charismatic Walt Disney, who is determined to adapt her book. But Pamela’s headstrong, unforgiving nature soon becomes clear as her own past is revealed.

Jennifer Lawrence plays a teenager named Ree who needs to find her father or else lose her house after he fails to show up for his court date. As the sole provider for her two younger siblings, Ree is an incredibly strong, determined heroine, who will do whatever it takes to survive. She also skins a squirrel, just FYI.

A period drama that doesn't have the female lead as some damsel in distress. In fact, Jane Eyre is more concerned for her own soul than any man *high five*. If you want to see a heroine with a little more gusto than the Austen girls (we love them, but they do just stand around and wait to be proposed to a LOT), this one is for you.

The message of this film is simple: find somewhere you belong. Even if that somewhere is stupid and happens to be an acapella singing group. The ensemble of characters are equally talented and will make you feel like you could actually be part of this group.

Sandra Bullock plays an inexperienced biomedical engineer who runs into trouble during her first flight into space and has to get back to Earth against all odds. Bullock doesn't play a typical action hero, she experiences doubt, panic, fear, all of which make her that much more a fascinating female lead.

After a divorce, Cheryl (Reese Witherspoon) goes on a journey of self-discovery by hiking over a thousand miles, finding new experiences and meeting new people along the way in order to come to terms with her own past mistakes. It's an amazing role based on the true story of a remarkable woman, and is definitely worth the watch/

Rich New Yorker Jasmine is forced to move out of her Manhattan home and has to move in with her sister in San Francisco after it turns out her husband is a fraudster and broke. This one is worth watching for Cate Blanchett's performance alone, it's incredible.

Carey Mulligan shines as Cathy, a girl deeply in love with her best friend from school, Tommy. But what they don't know is that whatever happens, they will be dead by their twenties as they are clones. Sci fi aspect aside, this is pretty tough stuff.

Shailene Woodley is awesome as George Clooney's headstrong daughter who goes through an emotional journey regarding the her relationship with her parents throughout the movie.

Will you be checking these movies out? Tweet us @sofeminineUK

Can We Talk About Miley Cyrus' Tribute To Her Dead Fish Please?