by Emmy Griffiths Published on 15 October 2015

If you love reading and never think the movies quite live up to the books, this is for you. The cinemas are set to explode with amazing book adaptations in 2016, and we have put together our favourites because let's face it: the book is always better!

Due to be released in February 2016 and starring Cinderella actress Lily James, Pride and Prejudice and Zombies is a take on the classic novel but with (you guessed it) zombies. The crossover of classic and horror genres has never been done before, and we are definitely looking forward to seeing the Bennet sisters wasting zombies in between their social outings.

Here's an except so you know what to expect: “Elizabeth lifted her skirt, disregarding modesty, and delivered a swift kick to the creature's head.” Yep, we're in.

It's tricky to summarise Tartt's epic and utterly beautiful novel in a couple of sentences, but we'll give it a go. After a terrible tragedy ruins Theo Decker's life, he grows up with no real family with a terrible secret that could ruin his life.

It is a story about love, addiction and crime, and the characters are so stunning that this is one well we can guarantee will stay in the hearts of its audience. Although it is yet to be cast, Tinker Tailor Soldier Spy screenwriter is due to adapt the monster novel and we already can't wait.

Room follows a five-year-old boy who has spent his entire life in one room, believing that it is the entire world and only he and his mother are real, when actually his mother was kidnapped and has been held there for years.

The film has already received the People's Choice Award at the Toronto Film Festival, and Brie Larson's performance has received critical acclaim. Room will be out in cinemas Friday 15th January.

4. It's What I Do: A Photographer's Life of Love and War - Lynsey Addario

Jennifer Lawrence is set to star in this memoir of Addario's career as a war photographer.

Covering the American invasion in Afghanistan and going out in search of crisis, resulting in a kidnapping in the Libyan civil war, Addario's story is bound to be a fascinating portrayal of a life steeped in adventure and danger.

This sci-fi novel is a love letter to all things Eighties, but whether you loved playing Pac-Man as a child or you're a Nineties Baby with no concept of a time before you, you'll enjoy this no matter what. The multi-billionaire creator of a virtual world dies, and hides his entire fortune somewhere within the world, leaving it to the first person who can find it and sparking the biggest treasure hunt the world has ever known.

​The movie will be directed by Stephen Spielberg, and we're already counting down the months to it's 2017 release date.

This creepy YA novel is bound to make an even creepier movie. Starring Eva Green, Asa Butterfield and Judi Dench, and being directed by Tim Burton, the story follows Jacob, a teenager who has been deeply troubled ever since witnessing the terrifying murder, seemingly by a supernatural creature, of his grandfather.

Obsessed with finding out the truth about his Grandfather's past, Jacob travels to the Orphanage where he grew up to find out why his Grandfather died, and if all of the fantastical stories he told him growing up are actually true.

7. The Girl on the Train - Paula Hawkins

Emily Blunt is due to star is the adaptation of this tense thriller following Rachel, a washed up alcoholic divorcee who becomes obsessed with a couple she see's on her daily commute, and becomes embroiled in the case when the wife suddenly goes missing.

It is the 'Gone Girl' of 2016, and you can guarantee that when the movie rolls around it'll be a huge hit.

8. The Mountain Between Us - Charles Martin

After a terrifying plane crash which leaves only two survivors, the pair fall in love as they rely on each other to survive the wilderness.

The movie will star Rosamund Pike (Gone Girl) and Charlie Hunnam (Sons of Anarchy) in the lead roles and, if it's anything like the book, will be an awesome watch.

9. Fantastic Beasts and Where To Find Them - JK Rowling

As a companion book to the Harry Potter series, if you read Fantastic Beasts you will simply be brushing up on your magical creatures knowledge, as rather than a novel it is a what's what of creepy, loveable and dangerous creatures.

After falling off a cliff on his ninth birthday, Louis Drax enters a deep coma and in that coma meets Gustave, a figure who begins to tell Louis his story as his Doctor begins to look into the odd circumstances of bad luck that have plagued Louis all of his life.

​So was Louis's fall really an accident, or is there more at work here? Jamie Dornan is set to star as Doctor Allan Pascale, with Aaron Paul playing Louis' father. 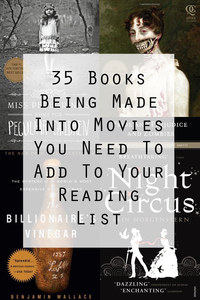 Emmy Griffiths
…
721 shares
From hair ideas to outifts, look no further for your daily inspiration