Guys, sigh with relief and take a bite of that nacho, because there is a new body form that all the ladies are (apparently) seeking to find, and there is nothing washboard about it. Rather than the sculpted arms of a God or the chiselled six pack of Zeus himself, us ladies want a man with a dad-bod in our lives. University student Mackenzie Pearson first explained the appeal of the Dad Bod, and since then the entirely logical wide appeal has spread. Here’s why…

He'll spend more time with you

Who really wants a boyfriend who splits his time between work and the gym and can only squeeze in some time with you whilst he's preparing his protein shakes for the week? Sure the result is fantastic, but if you want a man that actually has time to spend hanging around with you, he'll have the beloved dad bod.

It says a lot about personality

Your man isn't just obsessed with the gym. He isn't posting Instagram gym selfies and quotes about working hard and playing hard. He has other interests aside from his own appearance. Because really, a six pack on the outside means vanity on the inside, right?!

Who has ever swiped left on Tinder because a guy and his perfect abs looked TOO much out of your league? Don't be ashamed, we've all done it. The Dad bod makes us feel less intimidated, because as you were munching on Doritos whilst playing on the app, he was probably snacking on same thing, not swiping whilst doing one-handed chin-ups.

We're a little ashamed to say it, but the shallow part of us really likes the idea of a bulkier beau making us look like a tiny delicate ballerina princess. But that's just us.

Rocks are cuddly. They are rock solid and cold. Do you think Seth Rogan is cold? No. Seth Rogan is a freaking teddy bear. Would you rather sleep next to Seth Rogan or a rock? If you answered Seth, you are a fan of the dad bod.

You wouldn't feel self-conscious about your body, or constantly be comparing yourself. You'd both just happily share Chinese takeaways, watch Netflix and OCCASIONALLY go for runs together. But only when you feel like it.

Jason Segel, Seth Rogan, Vince Vaughn, Jonah Hill. All those actors you have secretly crushes on that you can't quite explain rock the dad bod!

Do you think the dad bod is a good luck? Tweet us @sofeminineUK!

Now be ready to swoon over our favourite celebrity dad bods... 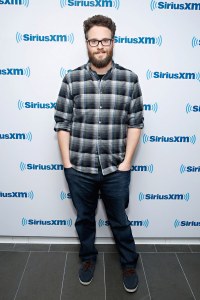 10 Of The Most Fantastically Ridiculous Celebrity Adverts