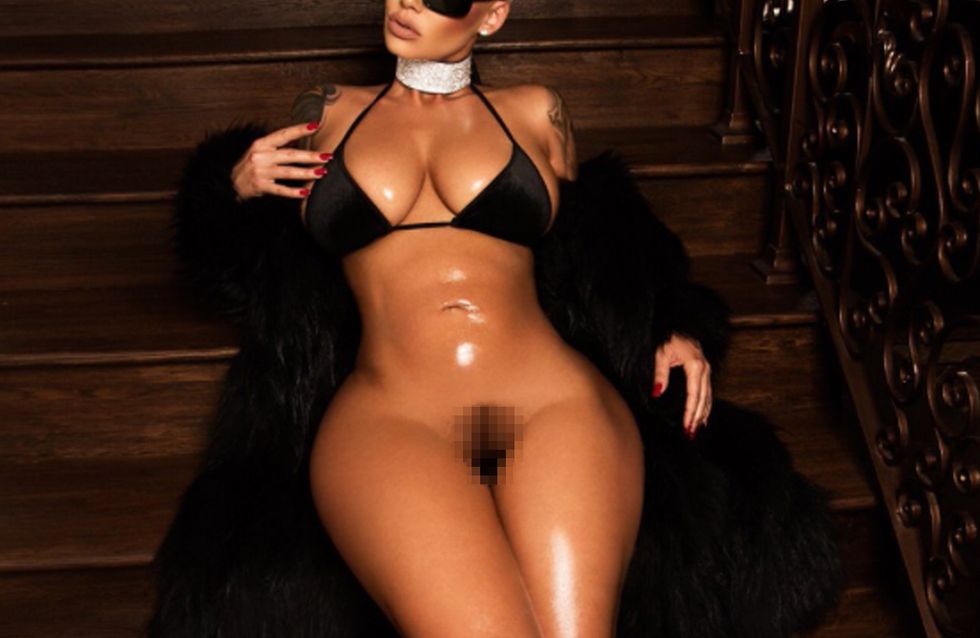 It's no secret Amber Rose is an outspoken, feminist icon and she's back doing what she does best - outing sexist men. The once-Kardashian rival caused quite the Twitter storm when she tweeted a photo which proudly displayed her pubic hair and professional troll Piers Morgan couldn't help but pipe up. The Good Morning Britain host was left eating his words though as Rose - and the whole of Twitter - sassed the hell out of his sexism.

What happens when a feminist hero comes face-to-face with a sexist pig? An almighty Twitter row, that's what. Amber Rose found herself in the midst of some social-media beef that'll no doubt go down in Twitter history at the weekend when Piers Morgan felt compelled to comment on a photo of Amber's bikini body.

It all started when Rose tweeted the above photo - with her neatly-trimmed pubic hair visible - alongside the caption: "Imma post this one more time for the haters." The image sent shockwaves through Twitter with 137K users liking it and many commenting on just how damn hot Rose looked. But for every "you're a queen" comment, there were 10 which questioned her feminist motive.

"Legit. Naked for likes/cash - prostitue. Hide it anyway you want. You're just showing the world how worthless you are," one wrote. Another chimed in: "She doesn't really look like that. That's a lot of photoshop. She has cellulite and stretch marks which to me is the pics I'd rather see."

Among those commenters was professional keyboard warrior Piers Morgan who labelled Rose an attention-seeker, retweeting the original image and commenting: "Put it away, luv. Thanks." Of course Rose wasn't going to take the insult and fired back to the British broadcaster: "#IllTakeThingsMisogynisticAssholesSayfor500Alex."

"It's not 'misogyny' to think that posting nude photos in the supposed name of feminist empowerment is pathetic attention-seeking bulls**t," he responded. This fiery back-and-forth exchange went on for two days with Morgan claiming Rose 'getting her kit off' wasn't in the name of feminism when her very purpose for posting the picture was to promote female empowerment and her SlutWalk event - a day of protests designed to raise awareness about issues including gender inequality and sexual violence.

I am re-posting this in the name of male empowerment. 💪💪 cc @DaRealAmberRose pic.twitter.com/lYzyUpo0dJ

Later adding: "You love strong women @piersmorgan I would make u my little submissive bitch & u would love every second of it I can see right through u." He hit back: "Well, there's a first time for everything Ms Rose. My worry would be you'd want to live-stream it to Instagram to 'promote feminism'." Things escalated faster than you can say pubic hair when Rose wrote: "No @piersmorgan I would video tape you masturbating to my picture while apologizing to me then post that on behalf of feminism." Clearly feeling belittled, he responded: "Well that escalated quickly... Shall we have a cup of tea instead & discuss where you're going wrong re feminism?"

Rose was the bigger woman and promptly put an end to the ongoing exchange, writing: "Have me on your show or you can come on mine so we can really hash this out @piersmorgan no love lost. You're entitled to your opinion" - a request Morgan seemed to agree to. He wrote: "Done. I'll get my people to talk to your people. Just don't bottle it like @ladygaga."

The mother-of-one was, rightfully, determined to have the last word and finished the interaction with one final piece of fire which read: "Although this conversation has been fun @piersmorgan I'm not here to argue about feminism I'm here to educate and bring awareness."

Amber Rose is the clear winner here as her original aim was to plug her SlutWalk event and thanks to Piers Morgan, a lot more people are talking about it.

Who's side are you on? Do you think flaunting pubic hair makes you a feminist or an attention seeker? Let us know @soFeminineUK

The Hairier The Better: Pubic Hair Transplants Are Now A Thing In Korea!

Piers Morgan Targeted By One Direction Fans After Twitter Spat