We’re getting a little bit worried that the lovely Davina McCall may have bitten off more than she can chew. The 46-year-old presenter has taken on a sport relief triathlon, and had to complete a one-mile swim in the freezing water of lake Windermere. However, it looked like the challenge was too much as Davina was dragged out of the lake after completing her swim. We hope she’s okay!

Davina McCall completed a gruelling one-mile swim in open water this morning, after having admitted last week that she was terrified at the challenge. Upon reaching the one mile mark, Davina was clinging to the support kayak, and the presenter had to be dragged from the lake out of sheer exhaustion.

The 46-year-old seemed unable to keep herself up as she was helped out of the lake and eventually carried out and taken to hospital, where her temperature was brought back up.

This is barely the beginning for Davina, whose Breaking Point challenge involves a 500-mile cycle, run and swim from Edinburgh to London, with the deadline being Friday. There are concerns that Davina’s health could be in danger, especially as the Sport Relief chiefs have said that she is currently: “undergoing a medical assessment after suffering suspected signs of hypothermia.”

Davina isn’t the first star to put her health through the mill in the name of charity, as previous years have seen David Walliams develop sores from his wetsuit during his River Thames challenge, and John Bishop suffered stress fractures as he did back-to-back marathons from Paris to London.

However, it looks like Davina is okay for now, as she tweeted: “I’m ok. That was hairy. Thank you for all your support. I’m about to get on a bike. @sportrelief thank you again.”

The support certainly has been flooding in as fans have remarked at how tough the conditions must have been. One person wrote: “If you think you are cold and wet, think of @ThisisDavina currently swimming Lake Windermere. Send her a warm twitter hug” and “Phenomenal @ThisisDavina "10weeks ago she could only swim about 1 length of a swimming pool".

Blimey, we’re not sure how she's doing it! Keep going Davina!

​Do you think the challenge is proving too much? Tweet us @sofeminineUK 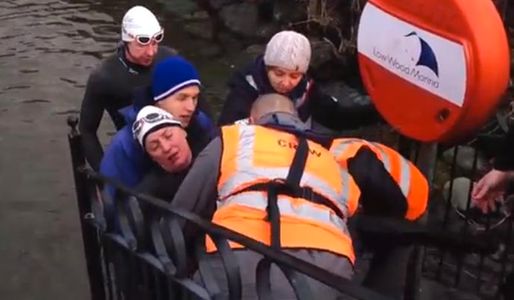