Anna Hathaway has denied claims that she demanded for people not to talk to her or take photos of her at a recent Cancer Research charity event. It had been reported that an email from Anne’s representatives had requested that the Oscar-winning actress was not to be approached, and that her attitude was miserable all evening. However the brunette beauty has vehemently slammed the claims, calling them 100% false.

Anne Hathaway was reportedly a bit of a sulky pants at a recent charity gala for Cancer Research, and an email was leaked which revealed Anne’s alleged desire to not be spoken to for the entire evening.

According to Celeb Buzz, the email reads: “PLEASE PLEASE do not take photos or ask for an autograph from Anne Hathaway. Her team is starting to get really concerned today.

"Please make sure none of you or your guests approach her. I know in the past our hosts have mingled in the party, but each person is different and we are trying to respect her space.”

The Les Miserables star was also reported to have been a bit of a mardy bum during The Pink Party gala, with one source revealing: “She was so rude and acted like a bitch to a few people she did speak to.

“She just sat there rolling her eyes all night.”

This may seem like a field day for the Hathahaters – Anne’s critics who find her demeanour irritating – however according to the Daily Mail the Dark Knight Rises star has come forward to deny both the email and the claims that she was rude.

Her publicist Stephen Huvane stated: “We never made any such requests and Anne happily interacted with the organisers and guests at the event. The cause is very personal to her as the [doctor] being honoured that evening saved one of her very close friends.”

The publicist of The Pink Party, Alexandra Lippin, backed Stephen up, saying it was “a delight to have her.”

“Anne could not have been nicer and was absolutely lovely throughout the evening.”

Alexandra continued: “She gave one of the most heartfelt speeches in the history of The Pink Party. It was extremely genuine. It was sincere and open with tears in her eyes as she spoke about her friend.”

Are you a fan of Anne? Tweet us @SofeminineUK 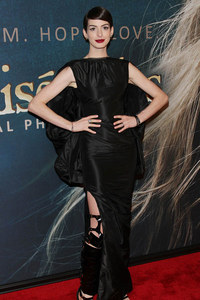 Anne Hathaway nearly drowns in Hawaii - Saved by nearby surfer

by the editorial team
+
All the news about Anne Hathaway