10 Bad Ideas You'll Definitely Have In Your 20's

by Dagney Pruner Published on 10 February 2015 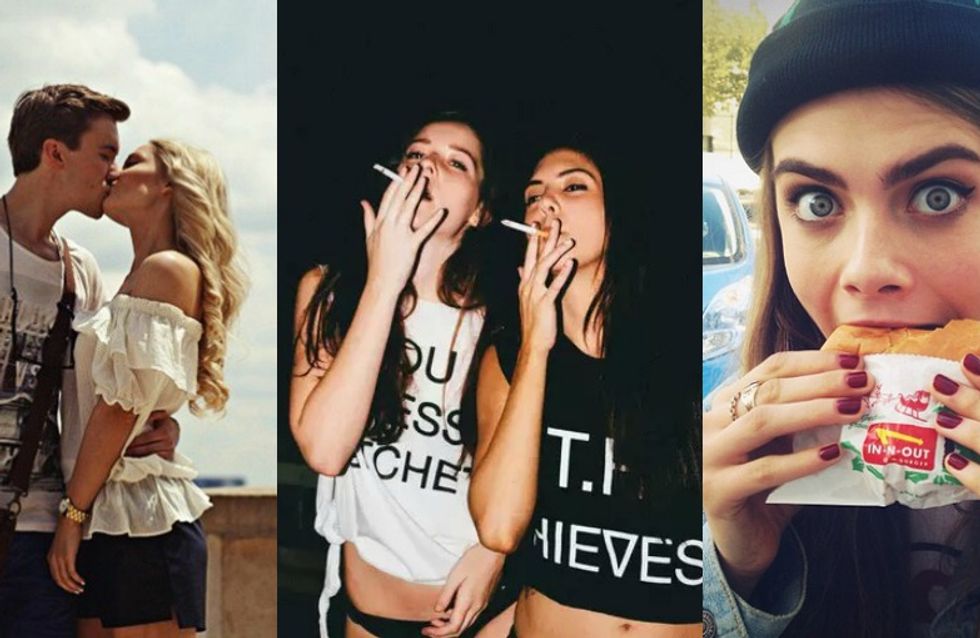 Your 20's are a time of self exploration, partying and praying that you finally figure out how the real world works. It is only natural that you'll make plenty of mistakes during these years, and many of them will involve a lot of alcohol, bad boys and plenty of calories. We all know hindsight is 20/20, so let's look at the 10 very bad ideas we will be having during our peak years.

1. Thinking your body is indestructible

In your 20's you can go out five nights a week, stay out till the wee hours and still wake up without looking like you got sucker punched in the face by your bad decisions. There is no way pulling all those all nighters and treating your liver like an amusement park isn't going to catch up with you when the big 3-0 rolls around. As much as we'd like to say we will pull in the reigns knowing that this will only end up haunting our fading svelte figure in a few years, we're still going to party like we're 21... sorry we're not sorry.

2. Dating guys you know are bad for you

In your 20's, you may date lots of men. You will probably even date men you think you might marry... although you secretly know they're bad for you. We call these men the "one before the one," because sometimes the only way to know what you DO want in a relationship is to figure out what you DON'T want first. It's not a bad idea to date guy you know may not be the best for you, but it's never to date a good idea to date guys you know are straight up bad for you. The stand-up comedian who happens to be amazing in bed may not be your soulmate, but try it out. The guy who treats you like crap but has tongue piercing so it would be fun to try for a while on the other hand is NEVER a good idea.

Exhibit A: Kevin Volchok. Don't let the abs distract you from his toxic personality. Seriously, stop staring at his abs.

3. Having an awful diet

One word: late night. Okay, two words: late night and Doritos. The twenty-something figure is almost immune to all of the junk food you put in it, because let's be honest, a kale salad is the LAST thing you want to eat after you've been out on the town pounding vodka. However, bad eating habits are hard to break once you figure out that your metabolism is not in fact as fast as you had imagined. Trouble lies ahead, and it's called cellulite.

4. Not caring about your job

Your first job out of uni probably won't be what you end up doing for the rest of your life, everybody has a starter job. Your 20's can be an excellent time to take advantage of trying out different jobs and finding what you really want to do with the rest of your life, it's never too early to start. So don't just have a job that pays the bills, have one that is a smart stepping stone for what you want to do next. In case you needed more encouragement: Beyonce was a millionaire with a Grammy winning solo album at 21. You and Beyonce have the exact same hours in the day.

5. Not doing enough self improvement

Your 20's is a rare time in your life where you have very little personal responsibility: you probably aren't married, no kids, no mortgage to worry about, etc. Thus it is the PERFECT time to do some work on yours truly. Do some self reflection and figure out what you want to work on when it comes to you. Do you want to learn to be more patient and throw less pity parties for yourself? Do you want to learn to control your temper and date guys that would not be described by their ex as a sociopath? This is the ideal time to work on that, so put it in the effort. Nobody benefits more than you do.

6. Thinking you have to be friends with everybody

If you had a pretty social University experience, than you probably consider your close friend group to be about 30 people. That is not sustainable in the real world. Throughout your 20's, learn to trim the fat of your friend group and figure out which friends actually make you a better person. Being friends with somebody just because you've considered yourself friends for a long time isn't a reason to keep them around. Be aware that some "friends" may not have your best interests at heart, so use your 20's to figure out who to keep around and who to vote off the island, odds are you're doing them a favour too.

7. Believing that drama is unavoidable

Fun fact: drama is NOT required to be party of your daily routine in your 20's. If you've ever watched an episode of any of the Made in Chelsea than you know that 99.9% of their fights are unnecessary and completely avoidable. Between all the partying and life changes your friends go through during this time, it's very easy for drama to sneak its way in to your social life. Don't let it. As tempting as it is to say what's on your mind without thinking of the consequences, and then gossip about it with your friend over a bottle(s) of chardonnay afterward, realise that you need to be part of the solution, not the problem.

8. Lose touch with people you are care about

In college it's easy to be around your BFFs all the time, you don't need to make an effort to stay in touch when you know you'll see them in class the next day. In the real world, friends move to different cities, have busy jobs and make new friends you may not know. Although it is important to cut out "friends" that you know are not a good influence in your life, it is JUST as important to go the extra mile to keep those friends that do make you better in your life, even if it's hard to do because of long distance or your schedule. Jobs and boyfriends come and go, but really good friends are here to stay, as long as you give the relationship the TLC it deserves.

9. Choosing guys over your friends

Is it one of the best feelings ever when you meet a guy in your 20's and you think to yourself: this could actually be THE one? Yes, it is. However, the majority of relationships at that young of an age usually don't work out. So when you start skipping on girls dinners to hang out at his place or forget your friends birthday because he had planned a trip for you two that weekend...don't. Because when you breakup all you are going to have left is the life you had before you met him, and if your friends haven't seen you in six months they probably won't be super amped to have to listen to you whine about the breakup. Absence in friendships does not make the heart grow fonder, it just makes them worse.

10. Choosing a path in your life

It's one of the biggest dilemmas of the twenty-something relationship: do you move in with your boyfriend? Or on an even larger scale: do you move cities to be with your boyfriend? There is no right or wrong answer, but our generation treats cohabitation much more loosely than our parents did. If you are going to give up your own space, your roommates, or even a city to be with your man, make sure you are doing it for you, not just for your relationship and NOT just for him. You are the one that has to live with the decision (and the consequences if something goes wrong) so just make sure you choose your living situation because it is what will make YOU happy.

10 Great Ways To Get Out Of A Gym Membership