Bye Bye Barack! A Walk Down Memory Lane With The World's Favourite President

WHY WORLD, WHY? Why do the Obamas have to leave the White House? Why do we have to have another president? We like things the way they are! But alas, Prez Obama's term is due to come to an end, and so we're celebrating him in the best way we know how: with pics of his best bits. Ladies and gents, welcome to our very own Obamarama.

It's hard to decide what our favourite Obama moment is. From his bromance with Vice President Joe Biden, to his celebratory fist bumps with Michelle, to his glorious singing, we will miss it all.

Barack Obama became president in 2008 and was the first African American president in American history. He then won a second term in 2012, but this year will be his last as prez of the United States. Last night he gave his final major speech, urging American citizens to vote for Hillary Clinton and slamming Donald Trump's campaign, saying "America is already great."

Both Barack and Michelle are a perfect example of class, grace and decorum, and we're gonna miss them greatly when they leave the White House in January. Obamarama 4ever!

From chilling with the family to addressing the troops in Iraq, check out our album of the greatest Obama moments of all time. 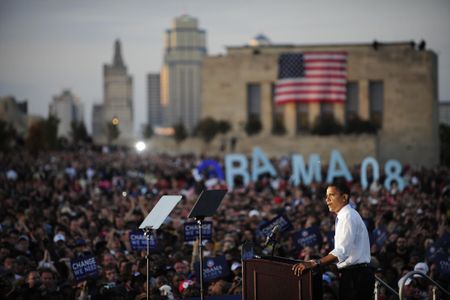