Taylor Swift has switched up her style more times than she's reignited her ongoing feud with Kanye West since bursting onto the pop-music scene as a curly-haired 16 year old back in 2006. And while there's no denying the singer has bags of swag, she's suffered her fair share of fashion faux pas too just like the rest of us, as this decade in pictures reveals... 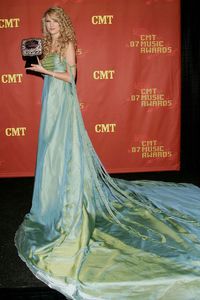 Taylor Swift's style evolution from the girl next door to gothic goddess hasn't been without its hiccups (see: this year's GRAMMYs) but she's often a real-life walking, talking definition of #outfitgoals, whether that be on the red carpet or on off-duty dates with her new boyfriend - Mr Tom Hiddleston.

She first appeared on our radar as a curly-haired and curious-eyed teen and as she prepares to celebrate the tenth anniversary of the release of her debut album (creatively titled Taylor Swift) in October, we remind you of her sartorial sins, wins and everything in between.

Quiz: Which Taylor Swift Ex-boyfriend Are You?