When you're a top actor like Benedict Cumberbatch you can afford to be fussy about the fan art you receive. This guy has an arts scholarship to Harrow School to his name, so if you want to send him a drawing make sure it's good - otherwise it's going in the bin. In fairness to the man we're not exactly sure what we'd do with lots of sketches of our own face...

Benedict Cumberbatch has explained that he receives a lot of fan art - and has admitted he's become rather discerning over their fate.

The Sherlock star has a legion of fans - or Cumberb**ches - many of whom can't help but express their love through art.

But this actor knows his art and has admitted the majority get chucked or "given away".

We're not sure who he's giving them to...

He told The Hollywood Reporter: "I've kept a couple that are stunning, that are just really beautiful drawings, and the rest I've had to give away.

"And I've told fans, 'Look, I'm very flattered, but what do you expect me to do with it? Think about it. Would you want your room surrounded by drawings of you?'"

King of clutter Sherlock - Ben's on-screen alter ego - may keep them to study for clues, but the actor has admitted he's not similar to his character.

He may have the sharp tongue but he doesn't "have his capacity to compartmentalise."

This could be a hint at the apparent failing of Ben's love life, while his career is going from strength to strength.

He was spotted with various ladies in London and Spain recently and left us wondering if everyone's favourite thesp would be off the market again soon.

But since then the 37-year-old has thrown himself into films and TV and is working towards the autumn release of The Fifth Estate.

This slightly controversial flick will follow the story of Wikileaks founder Julian Assange.

Speaking about this huge leading role, Benedict said: "When you're playing someone who's in the eye of the storm, you suddenly become incredibly conscious of that particular world, those particular concerns."

Explaining his recent photo protests, in which he has made political statements and encouraged the paparazzi to take their cameras somewhere more important, he said: "The news kept crashing in about [WikiLeaks source Bradley Manning]. There was this static in the air all the time."

Benedict is yet to meet Julian Assange but they have spoken via email.

He said: "He was pretty keen for me not to do the film, and the rest is sort of between us, really."

Note to self - if you ever meet Benedict don't ask him to answer questions about Julian while handing over your watercolour of his face! 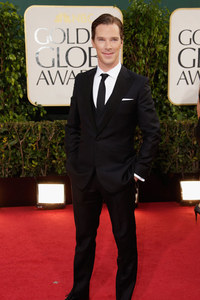