After the huge success of recent superhero flicks Man Of Steel and the Batman trilogy, a whole host of Hollywood hunks are vying for the role that Christian Bale has left behind. With a Batman vs. Superman movie officially in the works, it seems its heroes before bros when it comes to Wimbledon buddies Gerard Butler and Bradley Cooper.

A Batman vs. Superman film was officially announced at Comic Con a few weeks ago as a sequel to the summer smash hit Man Of Steel.

Warner Bros. and DC Comics are collaborating to produce the new superhero movie, this time with double the hunk action.

Superman's role is safely in the hands of Henry Cavill - no one would dare question his performance, would they?

But since Christian Bale has remained steadfast on his agreement to star as Batman in no more than three films, the part is up for grabs.

It sounds friendships are being damaged as the gloves are coming off between Gerard Butler, 43, and 38-year-old Bradley Cooper.

The pair have been mates for years and were spotted at Wimbledon this July, seemingly having the time of their lives.

They sported matching outfits - which they assured people was an accident - while taking selfies together.

But all that summer love is behind them now as they duke it out for the coveted role.

Sources told Now magazine: "They both want it and they aren't holding back in trying to impress the studio.

"The competition will be massive. The bromance is over for good."

Brad and Gerard aren't the only ones in the running to play Bruce Wayne.

Sources for Hollywood Reporter have stated that six actors are said to be "the top names surfacing at this stage".

But up against him are fellow Americans Joe Manganiello, Max Martini and Josh Brolin, plus Brits Matthew Goode and Richard Armitage.

Insiders have explained that movie bosses want their Bruce Wayne to be in his late 30s or around 40 and to be "established and rugged".

The script is still being written and Zack Snyder is only now starting the process of thinking about actors to fill the role.

So it sounds like all the "established, rugged" men in Hollywood are just going have to fight it out. 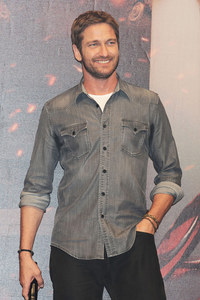 Francesca Menato
…
Feudfilm
For all the best videos, memes and shareable news!