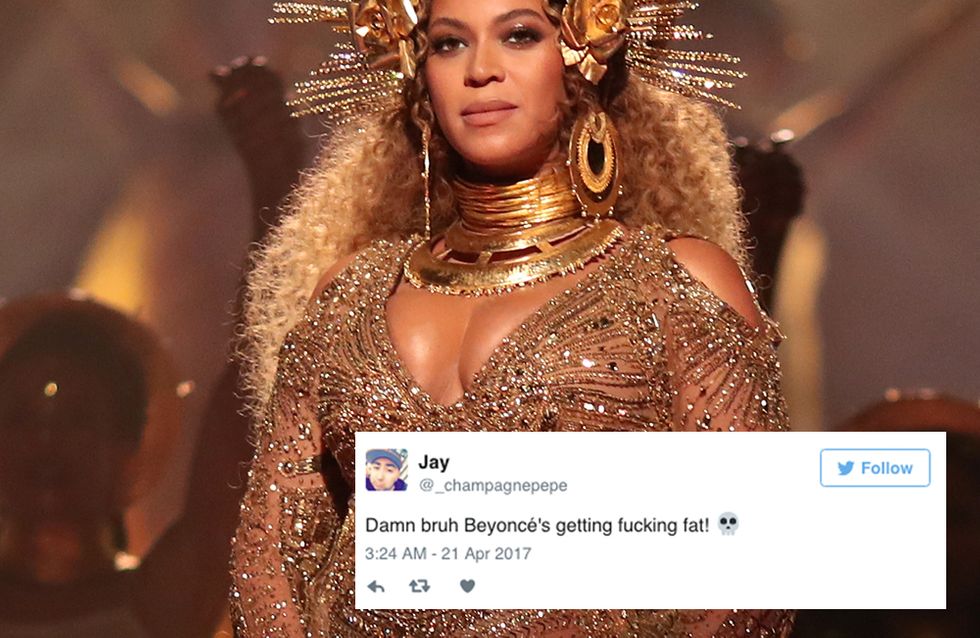 And in more let's-all-lose-faith-in-humanity news, trolls have fat shamed Beyonce after a new pregnancy picture emerged of her in the back seat of a car. Apparently, being a Queen and all that doesn't eliminate you from body-shaming keyboard warriors. Fortunately, her loyal Beyhive were quick to point out she is growing two human beings inside of her. Word of warning, don't rock the hive.

We like to think society is starting to wake up to the repercussions of irresponsible tweets and the effects of trolling - at least we were before we heard Beyonce has been the latest victim of fat shaming. Pregnancy fat shaming, to be more specific, which has gotta be the worst of its kind.

It seems not even Queen Bey is immune from the wrath of keyboard warriors after a new pregnancy photo caused Twitter trolls to react with fat-shaming jibes. As if coping with pregnancy isn't hard enough.

The 35-year-old Formation singer showed off her growing baby bump in a plunging red dress as she left a star studded bash at Beauty and Essex, in LA.

beyonce fat as hell now lmao. this really does make me believe something was up with her 1st "pregnancy"

Rest assured, for every brainless body bashing tweet out there, came several retorts from the loyal #Beyhive fans, who were quick to defend her blossoming pregnancy body. Hello, she has not just one but two people in there - let her grow with love goddamit.

Not surprisingly, Beyonce chose to keep a dignified silence on the matter and we'd expect nothing less from her tbh. Plus, it seems like her Hive have got this all on their own. Slay Queen, slay.

Y'all really calling Beyoncé fat and obese and overweight- BITCH SHE HAS TWO HUMAN BEINGS INSIDE OF HER. FUCKING LEAVE HER ALONE.

Y'all act like Beyonce ain't gonna come back looking finer than before after she gives birth 😏😜 Get ur jokes in now. U still ain't shit https://t.co/C6ovY0wMXb

Never thought I'd see the day where you all fat shamed Beyoncé, let alone a pregnant with twins Beyoncé. Y'all really hate women huh? https://t.co/CHKEBtynnS

What do you make of these fat-shaming trolls? No one hurts Queen Bey right? Tweet us: @sofeminineUK