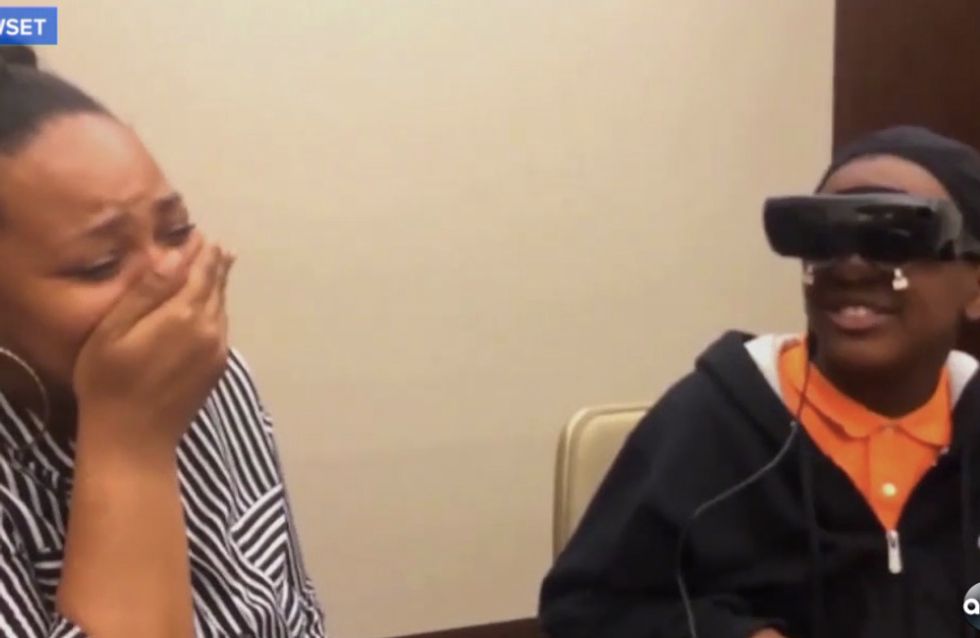 It's Friday, and we all know there's nothing that starts the weekend off better than a cute video - apart from maybe a G&T to go with it. This video, showing a young blind gent who gets to see his mum for the very first time, is going to make you emotional in all the right ways.

Christopher Ward Jr. has been legally blind his entire life. He has what is known as optic nerve hypoplasia, which means that, before he was born, his optic nerve didn't fully develop. To get around, Christopher uses a a white stick and help from his mother, Marquita Hackley, who tells ABC News that her son has "little light perception in his left eye and very, very low vision in his right eye." In order for Christopher to be able to see something, it has to be so close to his face it's basically touching.

Christopher and Marquita made the journey from their home in Forest, Virginia to Washington, D.C in order to try new wearable technology called eSight, that would allow Christopher to see with what the company calls 'unprecedented visual clarity'. The beautiful moment was capture on film, where not only did we see Christopher miraculously reading numbers off a board across the room, but Marquita was able to witness her son seeing her clearly for the very first time. Marquita told ABC News that the first thing her son said to her was "Oh Mommy, there you are!" Christopher followed this up by saying "I saw my mom, and she was very pretty." We're not crying you're crying!

At an eyewatering $15,000, Marquita started a crowdfunding campaign on YouCaring in order to raise the money to buy her son a pair of eSight goggles after their experience in Washington - a target which they smashed in no time at all! In fact, the campaign raised nearly $26,000! I'm sure we speak for everyone when we say we can't wait for Christopher to receive his new glasses. Watch the video below:

Did this vid make you tres emotional? Us too! Talk to us: @sofeminineUK

There's A New 'Naked' Restaurant Opening In London, If You're Feeling Brave