by Pascale Day Published on 8 February 2016 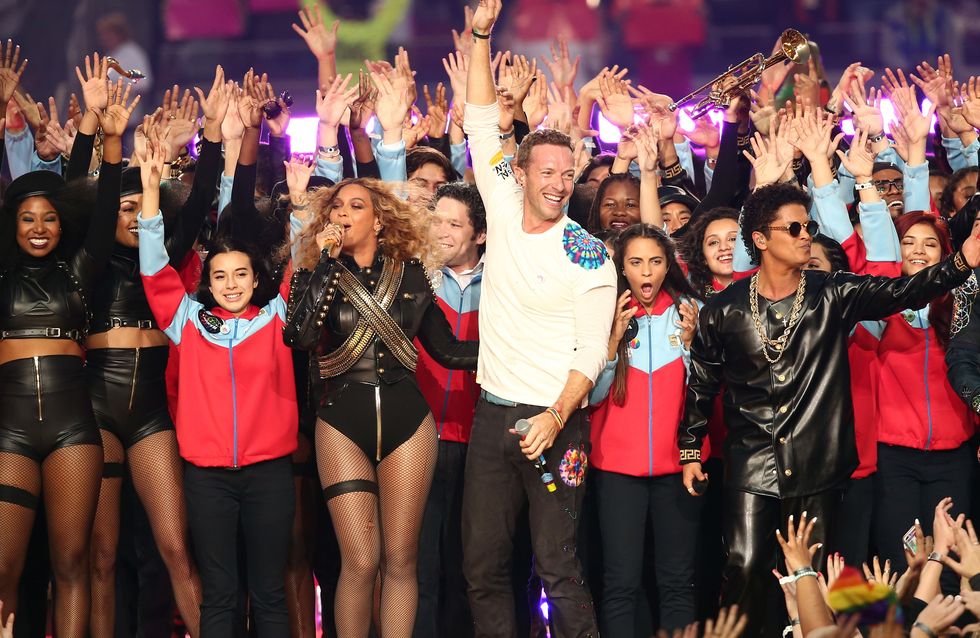 There was pyrotechnics, major tunes and way too much leather. Heck yes, it's that time of year again: Super Bowl Sunday! Coldplay were billed to play the half-time show, but unfortunately for ol' Chris Martin, the show was completely stolen from him by his special guests, Beyonce and Bruno Mars.

Come on ladies now let's get in formation. That formation is crying on our knees in front of the TV screaming "SLAY YONCE, SLAAAAAAAAY!" Because although it was Coldplay's show, Queen Bey came and stole it from right under their noses. Sometimes I don't even think she knows she's doing it. It just happens. She turns up and POOF - thunder stolen.

Beyonce joined Coldplay at the Super Bowl 50 half-time show. Coldplay did a lovely medley of their hits - mostly recent hits, because even though their first album was the best, The Scientist is a bit too depressing when you're trying to get everyone hyped for the second half of the Super Bowl.

At the end of Adventure of a Lifetime came a little scratch of a disc, and the camera swerves to a quiffed Marc Ronson, scratching those vinyls like only he knows how. The camera swerves further to reveal Bruno Mars and his crew, dressed in some kind of fancy bin bags, but it was ok because even though they hadn't made an effort with clothes their dancing was on POINT. And their pyrotechnics? Oh boy, they were good. They were good even though at several points we were very concerned about the proximity of the pyros to their obviously flammable outfits, but it kinda made it that bit more exciting. ​He did that kind of effortless dancing that makes you say "I think I can do that," but when you actually try and do it you just look mental, because we don't live in a world where you can get away with jiving around Oceana in a bin liner.

And then - awwwww snap! - it's Queen Bey time. Not one to do things by half measures, she has a pretty big percussion ensemble to introduce her, and as they get out of the way FINALLY, there she is, in all her sassy glory. Dressed as Michael Jackson with no trousers on, she immediately goes into new song Formation, which was dropped on Saturday. Luckily we've all listened to it at least a hundred times so we can join in on the bits where she says "Ok ladies now let's get in formation", "I got hot sauce in my bag", and "I twirl on my haters, [make something up] alligators".

Then, Bruno and Beyonce get on stage together with their crews to make one big leathery supergroup. They both performed a short but energetic dance routine in which Beyonce very nearly topples over, but this is Queen Bey we're talking about, so she bounces back, she recovers, she says No Big D and she gets over it.

Bey and Bruno pretend to have this fake beef, which is the point Chris Martin jumps in the middle of them to fake placate the fake beef. Because he's the vanilla in the middle of all this spice. Beyonce, she's cayenne pepper. Bruno's bringing that Tobasco. Chris Martin is rice pudding. In other words, in this Beyonce trio, he is Michelle.

Bruno and Beyonce leave the stage for a bit in order to give the limelight back to Chris, and he performs a bit of Clocks and a bit of Fix You, mixed in with Beautiful Day and Purple Rain as we look back on past half-time performers like Bruce Springsteen, Whitney Houston and Michael Jackson. Beyonce and Bruno come back, as does Ronson, looking awkward after being downgraded from decks to a tambourine. (Ronson: "But what shall I do?" Coldplay: "Errr... hold this...")

Then before you know it it's the end of the show, and everyone is on stage. Everyone. Coldplay, Bruno, Beyonce, the dancers, some children. I'm probably in there somewhere. At one point you can just see some trumpets floating around at the back. Then it's back to game, but it was fantastic while it lasted. Well done Beyonce. I mean Coldplay.

Did you see the halftime show? What do you think? Let us know! @sofeminineUK

​WATCH: The Super Bowl Just Dropped ALL Of The Movie Trailers

19 Things Everyone With Two BFFs Knows To Be True