Following the tragic death of Glee Star Cory Monteith, the actor's co-star and girlfriend Lea Michele worked closely with his family to arrange a private cremation and funeral. She also issued a further statement, thanking friends, family and fans for their support.

The world was shocked when it was revealed that the 31-year-old was found dead in his hotel room in Vancouver on Sunday.

The actor's body was released back to the family and they arranged a private viewing ceremony before a cremation in Canada.

Coroners in British Columbia completed a post mortem this week and announced there was no evidence to suggest his death was "anything other than a tragic accident".

The star, who had struggled with substance abuse problems since he was a teenager, was found to have "died of a mixed drug toxicity, involving heroin and alcohol".

Girlfriend and co-star Lea Michele has remained mostly quiet since the death and her publicity team had previously released a statement asking for people to respect her "privacy at this devastating time".

The couple were reportedly intending to move in together before Cory's death, which left 26-year-old Lea "devastated beyond belief".

A statement in People magazine read: "Lea is deeply grateful for all the love and support she's received from family, friends, and fans.

"She has been grieving alongside his family and making appropriate arrangements with them.

"They are supporting each other as they endure this profound loss together."

It concluded: "We continue to ask the media to respect the privacy of Lea and Cory's family."

Cory had been battling with addiction problems for over a decade and had voluntarily entered rehab in April of this year.

It's been suggested that the 31-year-old had started to lead a double life - he was clean and sober in LA, but returned to his "hard-partying substance abuser" ways in his native Canada.

His Glee cast mates had apparently staged an intervention for their co-star and friend in March before he checked into rehab.

According to TMZ: "It wasn't met with resistance. He was always so grateful and aware of how fortunate he was.

"The decision was to best help our friend. The needs of the show fell second to his well-being."

Friends, family and fans remain devastated by the loss and Richard Monteith, his cousin, is the first within the family to speak about the death.

He told Global BC TV: “He would do anything for anyone, give you the shirt off his back.

“He told me no matter how long your tunnel is - just know there is always a light at the end of the tunnel. He was that light for me.

He spoke of his hope that Cory be remembered for more than the issues that caused his death.

He added: "His life was full of beautiful stories, triumphs, failures and successes that it does not matter what his problems were." 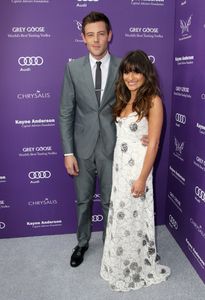