We’ve noticed that David Beckham and Brad Pitt are very similar in many ways – they are both ruggedly good looking, have famous spouses, a big brood of offspring and very successful careers. Their similarities haven’t escaped David, who has said he thinks Brad would be the perfect person to play him in a film – although a couple of other famous, very handsome A-list names were thrown out there as well. Oh David, you’re so cheeky!

David Beckham has said that he’d like Brad Pitt to play him in a film of his life. Can we all take a moment to marvel at how amazing this would be?!

The 38-year-old, who has recently actually starred in a sexy short biker film for British heritage brand Belstaff, joked about the movie star playing him in a biopic of his life whilst on talkSport Radio.

He said: “I think Brad would be the obvious choice.” 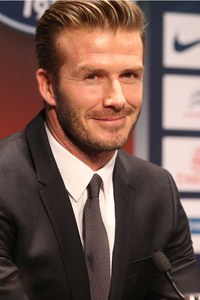 Can anyone else picture Brad Pitt with long hair pushed back by a hairband?

Who do we have in mind to play Victoria? Maybe Angelina Jolie will step up!

David Beckham is happy to have any fabulously good looking A-lister portray him though really, and he brought up a few other names. He said: “I’d like Brad to be playing me – him or Leonardo DiCaprio, one of the two. Or Bradley Cooper. They’re not bad looking guys.”

The footballer also spoke about his recent retirement from football, saying: “My career was pretty successful over the last 20 years and to be able to finish my career at PSG with a trophy, and then walk away from football, was very special.

“It’s never easy retiring and it’s not easy to walk away from something that you love but there were a lot of things I had ready to go the minute I stopped playing, that was important.

"I’ve got a big family, four kids to chase around, that keeps you busy enough. I’ve not really had the chance to sit down and miss playing the role.”

He said: “I think Victoria is waiting for me to get a couple of tyres around my waist but right now it’s not happening, thankfully!”

You make sure it doesn’t Becks. The women of Britain will never forgive you!