Former Disney star Demi Lovato turned 21 yesterday. Fortunately, she spent the day in Africa - away from the drama of the US media claiming they'd obtained naked photos of her. It's not known whether Demi is the victim of a clever Photoshop stunt or not, but it doesn't seem like she's too worried.

Demi Lovato became the latest victim of a nude photo scandal on her 21st birthday yesterday.

US website RadarOnline.com has alleged they were sent more than 20 X-rated images that claimed to show the singer with no clothes on last week.

The site alleges the pictures show a dark-haired woman, "who looks identical" to Demi, in a number of uncompromising positions.

In one the girl that's thought to be Demi is lying nude in a bath, while in another she's topless in bed.

RadarOnline was unable to fully confirm the images are the X Factor judge, though they do comment that a tattoo of 12 black birds on the girl's forearm matches Demi's inking.

The supplier of the pictures claimed to RadarOnline: "These are Demi. The collection I have show some nude, including face, some including parts of the body Demi is known for - tattoos, butt, chin.

"Then, I have pictures of her getting rowdy… I can guarantee you these photos are legitimately of Demi." 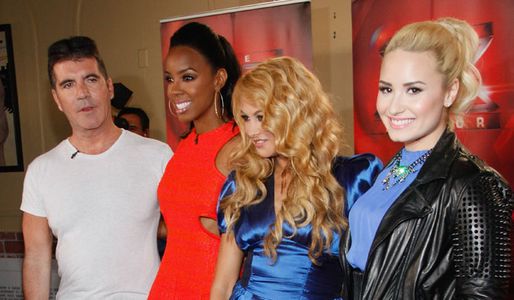 The site decided against publishing the images just before the launch of US X Factor, as they believe the show's "massive marketing and production plans could be thrown into complete turmoil".

Of course, Demi could just be the victim of a troll who's a dab hand at Photoshop - who knows.

But her name has previously arisen in relation to reports of a hacker who managed to obtain photos of at least 50 celebrities.

Other stars who reportedly had their cell phones hacked include Scarlett Johansson, Selena Gomez and Miley Cyrus.

Demi's rep refused to comment on the alleged photo leak.

And she certainly wasn't going to let a nude photo scandal ruin her birthday.

She posted an Instagram snap of herself doing some hard labour along with the caption: "Thank you all for the birthday wishes!!! Having the best birthday ever in Africa with @freethechildren!!!"

She later added: "What an unreal birthday. Speechless."