Doctor Who season 9 is nearly upon us, and we have everything you need to know about the upcoming season with good old Peter Capaldi and Jenna Coleman. From trailers to cast info to premiere dates - it's all here, and it looks like season 9 is going to be a good one!

What are the episodes called?

Doctor Who Official recently announced the episode titles, and we are already in FULL discussion mode. Something we definitely can be sure of is that there will be a LOT of Zygons.

What's it going to be about?

Aside from The Doctor saving people, you mean? It looks like the Doctor has gone AWOL (like that's never happened before) but without things things are going to ruin and the world needs his help.

Here is the official synopsis for your nerdy reading pleasure: "Where is the Doctor? When the skies of Earth are frozen by a mysterious alien force, Clara needs her friend. But where is the Doctor, and what is he hiding from? As past deeds come back to haunt him, old enemies will come face-to-face, and for the Doctor and Clara survival seems impossible."

Although Capaldi's Doctor is just as eccentric as Matt Smith's and David Tennant's, it's definitely been more Christopher Eccleston is terms of attitude and personality. However, according to Capaldi this year The Doctor is going to have a newfound zest for life.

​He told EW: "He’s throwing himself into life with a newfound hunger for adventure. He’s in pursuit of joy and grabbing every thrill that he can along the way. But I sense him running from something, that even he does not yet understand." He also makes a mistake which will have "cataclysmic repercussions."

Clara is still the main girl, but Maisie Williams will be appearing in a two episodes as a mysterious new character

That's right, Game of Thrones meets Doctor Who, and we could NOT be happier! Although we're not quite sure who Maisie is playing yet, we know that Clara is going to be her typical plucky self after a rather unfortunate storyline from last year saw her boyfriend, Danny Pink, die in a car accident (and then sacrifice himself later, but it's a long story).

Capaldi said of The Doctor and Clara: “They’ve suddenly realised that they are the most fortunate people in all of time and space and are hell-bent on adventure.

"Jenna continues to deliver a beautifully nuanced, complex, and funny performance that marks her out as one of the best companions ever.”

For Capaldi's first outing as the Doctor in season 8, there was an episodic feel to the show, without all of the story arc craziness of previous Doctors (#BadWolf#TheFaceofBoe#SilenceWillFall). However, this time it sounds like there is definitely going to be a bigger picture to the story as there are four two-part episodes in the 12 episode series.

Showrunner Steven Moffat said: "It's not just two-parters - it's occasionally taking one strand and keeping it going. There's two-parters where the episodes are quite different, two-parters that are quite traditional - just to change the rhythm of it."

We know there are always those episodes where they've clearly ran out of money and so instead of naff CGI and impressive aliens we get something really simple like a group of people stuck in a transport carrier with an unseen threat banging around outside, or statues chasing a girl around a haunted house, and they always end up being the BEST ones. So this time we can't wait for the episode where The Doctor is the ONLY character to appear in a move that has been described as: "it's most experimental episode ever".

Moffat said it is: "a new challenge on the show...I can't tell you too much about this, but it's certainly unique and a big first for the show!"

According to Capaldi, there will be a sleuth of old and new villains this year. He said: "There is an epic sweep to this season and I think the villains and monsters reflect that. Great new ones, brilliant old ones, and some very scary creatures looming in stories with real emotional ambition."

Of course this will include the return of Missy in the first two-part episode arc, the Master's first reincarnation as a woman (who is freaking awesome by the way). Of course Moffat had no problem bringing her back ASAP, and told TVGuide.co.uk: "Michelle Gomez as Missy was an instant hit last year, so she's straight back to plague the Doctor and Clara in the series opener. But what brings her back is the last thing they'd expect."

Are you looking forward to the new season? Tweet us @sofeminineUK!

Check out all the images from the upcoming season... 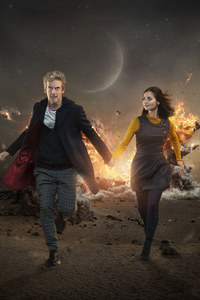 The Doctor Who Brand New Season 9 Trailer Is Here!