by Emmy Griffiths Published on 31 October 2014

Doctor Who season 8 is starting to come to an end tomorrow night with the first of it’s two-part finale, and it’s fair to say we’re more than curious about what to expect. Why has Clara gone dark? What is this Paradise? Who the HELL is Missy? Since we’re getting no answers to these questions today, here’s our favourite past finales…

11. The Sound of Drums/Last of the Time Lords

Meh. The Master was an awesome villain, but the way he was beaten was kind of cringey. David Tennant floating through the air telling him he’s forgiven? Even the most hard-core of fans probably face palmed a little bit!

Not to mention Martha’s exit as the Doctor’s companion, which was obviously a blow for Martha fans. All two of them never got over it (lol).

The BEST thing by far from this season finale was the revelation of Captain Jack Harness. Like, no one guessed it. But it ALL MADE SENSE.

Matt Smith’s final episode (more or less) as the Doctor was the LAMEST thing to ever have graced our screens. Instead of going out in a blaze of glory, or overwrought misery fest (see David Tennant’s regeneration), Matt’s Doctor basically died of old age after protecting a town called Christmas for four hundred years.

Ugh, no. We did perhaps shed a tiny little tear when Amy appeared to him for the last time though, oh, and when he took his bow tie off. Sob.

River totally avoided killing the Doctor and made time go batsh*t crazy (trains were coming out of pyramids for crying out loud), and naturally the Doctor needs to sort it out by dying.

Although the solution to this problem was STUPID (‘you thought I was dead for the entire season but in actual fact it was just a robot version of me LOL’), the Silence were up there with the best monsters the show has ever come up with, the Doctor gets hitched and Amy killing Madam Kovarian was AH-MAZ-ING.

Bye Amy. Bye Rory. Bye any moisture left in our bodies as we cry salty tears.

7. The Name of the Doctor

The episode as a whole wasn’t the most earth-shattering DW episode we’ve ever watched, but the introduction of John Hurt as the War Doctor was a game changer. What Whovian watched that without freaking out?

6. Bad Wolf/The Parting of the Ways

In Christopher Eccleston’s last outing as the Doctor, we finally discover who ‘Bad Wolf’ is, have a pretty epic speech from Rose and welcome David Tennant in style.

Nothing too sad or too dramatic happens, let’s face it, no one was particularly devastated to see Chris go (not that he was ‘fantastic’ but you know, his heart obviously wasn’t really in it) but the story line was a cracker.

Even after eight years we can’t really talk about this finale with dying a little inside.

Sure the Dalek/Cyberman together thing was a little uninspired, but Rose’s exit is probably the most emotional thing that has ever happened to anyone who cared about a TV show. That scene on the beach…nah we just can’t go there again. WHY DIDN’T THEY JUST LET HIM SAY I LOVE YOU THEY DIDN’T HAVE TO MAKE THINGS WORSE.

The story was amazing, so much timey wimey craziness going on and yet somehow you could keep up: Rory was alive! The Doctor teamed up with little Amelia! Amy was in the Pandorica! The Universe was going to end! All the baddies had teamed up! The Doctor was going to die! ARGHHH!

Everyone has a favourite Doctor, so if yours was David Tennant, this was definitely a dark, dark day.

In proof that life isn’t fair, David Tennant’s Doctor saves poor old Alfred (who knocked four times, GASP), then went round saying goodbye to all his companions before dying alone in his TARDIS with the pretty horrible last words of: “I don’t want to go..”

This was just cruel. Thanks Russell T Davis for breaking our hearts AGAIN.

OH-MA-GAHD this episode. We finally find out who River Song really is, the Doctor does some banging speeches, Rory is back in his Centurion costume (hello!) and obviously everything ends in tears/confusion/REVELATIONS.

This had to be the most tragic companion exit the show has ever seen. Rose was parted from the Doctor forever, but still had her family and was still going to defend the earth from aliens. Martha chose to leave and finish her studies, Amy and Rory were blasted into the past but lived the rest of their lives happily together, but Donna?

Instead of killing her off or giving her a peaceful exit, the Doctor had to wipe all her memories of her adventures so she becomes the indifferently shallow, insignificant temp that she had been before they met, with no idea that she'd saved the world. Ugh. Awful. Still, GREAT season finale!

We have no idea where this one is going to fall on the spectrum, so here’s a preview instead. Tweet your theories of what will happen @sofeminineUK!
​
This article was written by Emmy Griffiths. Follow her @emmyfg! 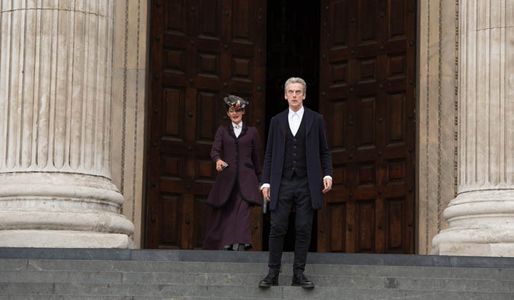 All images via BBC Pictures

Was 'Listen' The Scariest Doctor Who Episode Yet? 12 Of Doctor Who's Most Terrifying Moments