Why We're Crazy About 50 Shades Of Grey's Jamie Dornan

Okay, let's begin by agreeing that the books are definitely not winning any Pulitzers, and reviews of the film aren't much better. However, the weak storyline and cringe-worthy lines has NOT stoped us from recognising what the world should know to be true: Christian Grey actor Jamie Dornan is fiiiine. Here's why we're 50 shades of in love with the actor...

He has that tall, dark and mysterious thing going on that every fortune teller promised us we'd eventually find in our lives. It might be a little cliche, but it's for good reason. Tall, dark and handsome just works.

Not only is Jamie a model and actor, he used to be in a band. This probably means he could serenade us #justsaying.

Seriously, who wouldn't want to hear that come from the shower in the morning?

His Twitter feed is quite simply hilarious. Boy has a sense of humour.

Those people who hold and talk into their phones like they're talking into a walkie-talkie are really holding us back as a species.

So he sings, acts, models, and has a sense of humour. How could he possibly be sexier? Oh right yeah, he's IRISH.

It might make us feel a little better about how substandard our boyfriends are in relation to Jamie is he was a player, but nope! He is happily married to Amelia Warner as of 2013, and the pair had a baby born the same year. GAH HE'S SUCH A GOOD GUY.

Not enough these reasons are good enough? Here are some photographs to help change your mind... 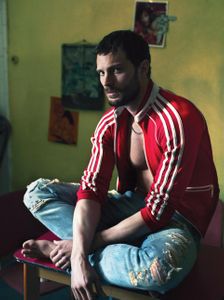