The Best Moments of the Golden Globes 2015, As Told In GIFs

Some may argue that the highlights of The Golden Globes 2015 were the triumphant wins of Boyhood and The Grand Budapest Hotel. However, we know better. While we were happy to celebrate and give credit where credits due on the talent front, these GIFs deserve their own praise. Let's face it - these are the moments that made the night! 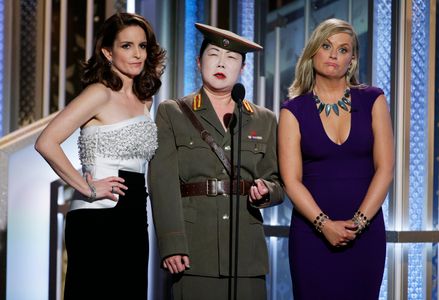 Best GIFs of the Golden Globes 2015

Benedict Cumberbatch "photobombing" Meryl Streep and Margaret Cho. The man just loves photobombing. It's a part of who he is now.

However, he does a top job of looking innocent about the whole thing.

We also just enjoyed watching him enjoy himself. He's such a Cumberbabe.

Emma Stone was a sport when Tina Fey and Amy Poehler took the p*ss out of her huge gorgeous eyes...

Jennifer Aniston gave Kate Hudson a cheeky pat on the bum and Kate Hudson presumably still isn't over it.

The good vibes between Paul Rudd and Adam Levine are almost tangible.

So...was Chrissy Teigen smiling or laughing or doing both? Or just trying to keep her face neutral? Or was she feeling some other emotion? WE NEED ANSWERS.

Jennifer Lopez and Hawkeye have fun with a harmless little boob joke.

When these two were the HAPPIEST ANY PERSON COULD BE.

Check out the best dressed: