by Alison Potter Published on 8 February 2013

Spoilsport Grammy producers are sick of the spotlight constantly being on the attention-seeking stars’ outfit choices.

In an attempt to bring the focus back to the music, broadcasters CBS have reportedly announced a dress code that will surely leave Rihanna in a last minute panic over what to wear.

The bizarre list of rules - dubbed the “wardrobe advisory” - orders all Grammy guests to cover up their private parts and avoid wearing anything that could potentially cause a wardrobe malfunction.

The email was intended to remain private and reportedly CBS are annoyed that it’s been leaked on the internet. 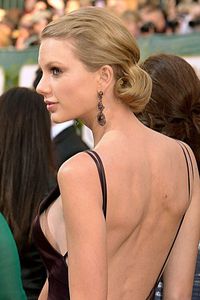 Traditionally all eyes are on the red carpet at the Grammy Awards, which has become famed for its eye-catching and risqué fashion.

In 2000, Jennifer Lopez infamously wore a nearly-see through green-blue dress slit directly down the front and in 2011 Lady Gaga made her entrance in a giant egg before revealing her transparent plastic skirt and crop top.

Most recently, Taylor Swift accidentally bared her boob on the Golden Globes red carpet and Les Mis star Anne Hathaway suffered an X-rated flash when her thigh-high split dress rode up and exposed her crotch.

“Please be sure that buttocks and female breasts are adequately covered. Thong type costumes are problematic.

“Please avoid exposing bare fleshy under curves of the buttocks and buttock crack. Bare sides or under curvature of the breasts is also problematic.

“Please be sure the genital region is adequately covered so that there is no visible ‘puffy’ bare skin exposure.”

As well as hoping to avoid any form of nudity, CBS have also asked for there to be no brand names on clothing, no obscene language written anywhere and no organised causes championed - including on “lapel pins”.

Hopefully those rambunctious young stars will go ahead with their crazy outfit choices anyway, otherwise it’s going to be a pretty dull ceremony!