by Emmy Griffiths Published on 3 February 2014 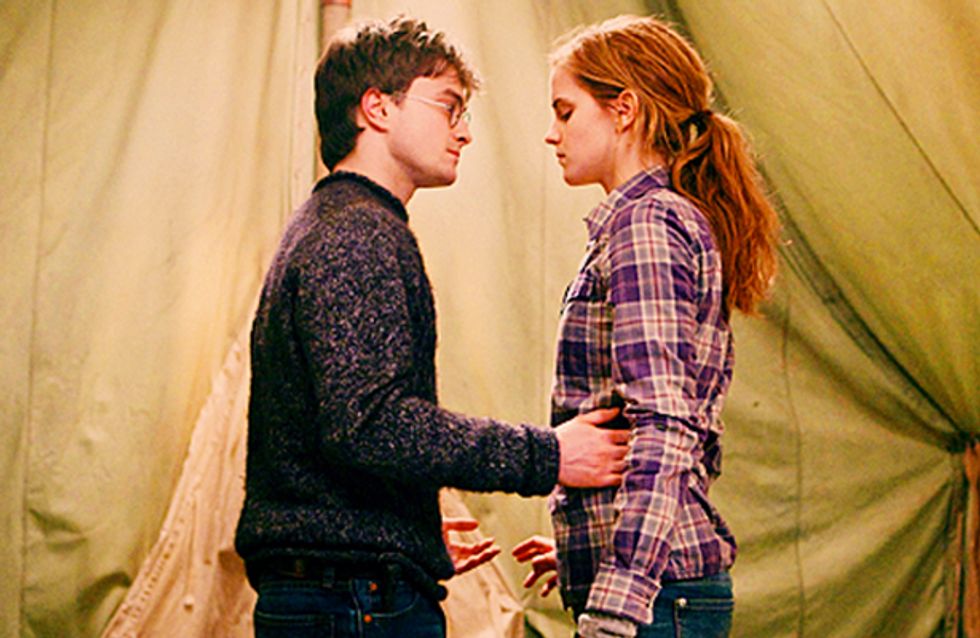 If you’re anything like us, your emotions are all over the place after JK Rowling declared she regretted pairing Hermione with Ron, and that Harry would have been a better match for the intelligent, thoughtful Hermione rather than the laid-back but tactless Ron. We’re not sure whether we’re completely okay with this revelation. In fact, we are horrified. But it got us to thinking about the changes we would make to the series if we had the chance…spoilers ahead!

Come on, why did Fred have to be the one to die? We knew that our favourite characters wouldn’t all survive the battle of Hogwarts, and accepted that it made it realistic and showed the true gravity of war blah blah blah.

But why did it have to be Fred?! He and George were the comic relief of the series, and ripping into the Weasley family like that just seemed too terrible for us to be cool about it. Especially since we all know that Molly’s Boggart took the shape of her dead children. Sob.

9. Harry and Luna hook up

Okay, book Ginny was cool (let’s not start on movie Ginny, that’s a conversation for another time), but JK gave us almost no details of her and Harry's relationship except that they mutually fancied each other and liked Quidditch. Meh.

On the other hand, Harry’s relationship with Luna was a lovely, three-dimensional thing, and maybe Luna’s spacey but charming ways would have cheered Harry up a bit, the grumpy bum.

In an interview following the release of The Deathly Hallows, JK Rowling revealed what became of the characters in adulthood. She claimed that Harry became a top Auror and caught many a bad wizard. We know Harry was amazing at Defence Against the Dark Arts and all that, but was there anyone else pretty unsatisfied with this future?

Harry has done the hero thing. He defeated the most powerful evil wizard ever known, so why not leave catching Voldemort's minions to the Aurors, go enjoy himself and play some Quidditch? They mention that he could play for England too many times for it not to become true.

JK Rowling revealed that Dumbledore was gay and in love with Grindelwald to a delighted fan response. But couldn’t we have seen more of this relationship in the books and films?

Let’s face it – the romance in the series was either teen angsty or too fleeting and it seems a shame that such an interesting love affair went by-and-large ignored.

6. Sirius Black lives to be exonerated

We’re not going to say that Sirius Black shouldn’t have died. We know why it happened – Harry is given a father figure again who is ripped away from him, it was terrible but necessary for him to be independent.

But the worst part of Sirius dying for us was that he was still on the run for a terrible crime he didn’t commit. It would have been so nice if he was cleared before he snuffed it – just to see everyone apologise!

It’s nice to know what the gang has been up to since killing off Voldey but…Ron passing his driving test? Harry and Ginny having three kids? Calling one ALBUS SEVERUS? Come on, we know it’s supposed to show the lovely normal life that Harry has always craved, but this epilogue was so naff.

JK Rowling said that Dobby had to die to wake Harry up to what he was doing. She said: “Dobby was someone that was very vulnerable and really entirely guiltless…it was another senseless murder …and I think there’s something particularly chilling about entirely innocent victims of violence.”

Erm hello, HEDWIG?! You didn’t need to kill them both off! They both symbolised the same thing! And Dobby is the cutest little fella, for shame!

We don't like that you barely saw anything of Hermione’s parents. You know everything there is to know about Harry's, as well as his Aunt and Uncle, and Ron’s family are also a huge part of the series.

We know the Grangers are muggles, but wouldn’t it have been fun to see them interact with the wizarding world a bit? Missed opportunity JK!

Here we have probably the coolest cross-genre between crime and fantasy ever…at our fingertips…and it is pretty much ignored! The Aurors, an elite of specialist officers for the Department of Magical Law Enforcement, are mentioned and of course Tonks, Kingsley and Moody are the Aurors we are introduced to in the books – but their work is only mentioned! We want to watch some wizardly MI6 action!

We would definitely love to have seen more of the crime-fighting bunch, especially after this April Fools day trailer for a show based on the wizard elite looked so good!

JK Rowling said in an interview that in hindsight, Harry and Hermione should have been together, leaving poor lovelorn Ron to face his deepest fears of being nothing compared to his best mate. It’s made us evaluate everything about our childhoods. JK why have you done this to us?!

Is there anything about Harry Potter you'd want to change? Tweet us @sofeminineUK