Heading for divorce? Beyoncé and Jay Z on a ‘trial separation'

Beyoncé and Jay Z always seemed like one of the most rock solid superstar couples, but new reports suggest that all is not well in the A-list marriage. In fact a US tabloid goes as far as to claim that the pair are having a “trial separation” to help them work out if they want to stay together or if they should start thinking about divorce proceedings.

The undisputed most powerful marriage in music may be breaking up, as it’s been claimed that Beyoncé and Jay Z are on “shaky ground”.

The power couple – who have an 11-month-old daughter Blue Ivy together – have been married since 2008.

On the surface everything seems fine between the rapper and the former Destiny’s Child singer, who is currently on the Australian leg of her sell-out Mrs Carter Show world tour.

But US tabloid magazine Star alleges that they are treating the time they are spending apart on opposite sides of the world as a "trial separation."

The pair had some family time together Down Under at the start of the month, with Beyoncé uploading several cute snaps of daughter Blue and her hubbie, however it’s claimed that it wasn’t a romantic mini-break for the married couple.

An unnamed source tells Star magazine that it was in fact an attempt to repair the alleged problems between the two of them after a number of arguments.

"Jay Z’s early November trip to Australia was not just a family getaway, it was a last-ditch effort to keep his marriage afloat," the insider told Star.

"Jay Z’s decision to tour Europe at the same time as Beyoncé is touring Australia has caused serious damage to their relationship — damage that may be ultimately prove to be irreparable.”

"Not only did he plan the tour without consulting her at all, but he didn’t even try to coordinate dates with her tour. She told him he was selfish."

The Independent Woman singer certainly isn’t the type of person to put up with being treated badly, so she’s reportedly been very upfront with how she feels to Jay.

The so-called insider continued: "Beyoncé has been feeling like a single mother lately — and has been letting her husband know he’s on shaky ground, and she’s using the time they spend apart as a trial separation."

So far the pair have chosen to ignore the speculation, but Beyoncé was spotted back in the US yesterday.

The Grown Woman singer was seen coming out of a prestigious LA studio, hiding her face under a Louis Vuitton balaclava.

Rumour has it the 32-year-old had been recording a new top secret video project, while Jay continues with his European tour.

Fingers crossed there’s no truth to the break-up rumours, as we don’t think we could cope if they split!

Would you be upset if Jay Z and Beyoncé split? Tweet us @SofeminineUK. 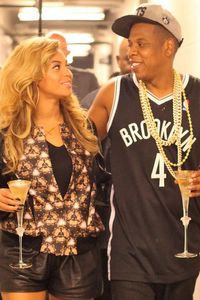